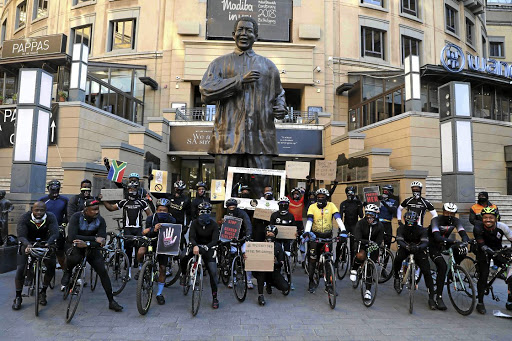 More than 30 cyclists took part in a ride against GBV from Mandela Square, Sandton, to the Union Buildings in Pretoria.
Image: Thulani Mbele

A group of cyclists endured a gruelling ride from Johannesburg to Pretoria on Mandela Day to raise awareness about the scourge of gender-based violence.

Among the riders was Fulufhelo Ramulifho, 36, a gender activist who said the
increase in the number of cases of gender-based violence during the lockdown had prompted her to do something in the hope of seeing a change in society.

"This ride is meant to celebrate uTata's [Nelson Mandela] legacy. He was a leader in driving change and today's ride is about being the change we want to see," said Ramulifho.

"Women face issues like gender-based violence, social ills and inequality. We have seen heroes like Mandela do it. So, it is within us to drive change, create awareness and start these conversations, create opportunities where we talk, discuss, debate women issues."

East Rand residents came out in numbers to support the family of a 31-year-old woman who was allegedly killed by her live-in lover in yet another ...
News
1 year ago

Fellow cyclists also spoke about the importance of the ride, particularly in raising awareness.

The cycling united them to speak in one voice and share their stories along the journey.

"We are riding 103km to show that we are committed to our cause to stop gender-based violence," said one of the cyclists who did not give her name.

"This is a protest ride where we ride against gender-based violence because as both males and females, we are equal and men should not be advantaged over women. No one should be advantaged."

Ramulifho said the ride was also about women taking up space in cycling as a sport which is still male-dominated.

"We are used to seeing men cycling and thinking that cycling is an intimidating sport and for men only. Today's ride is to showcase and tell women that we can ride, we can cycle, we can take up the space and we are equally strong riders."

In 2018, Ayanda Simelane, from KwaThema in Gauteng, was hacked to death and her alleged killer was due to appear in court a month ago.
News
1 year ago
Next Article