Avbob prepares for Covid-19 spike with containers to store bodies 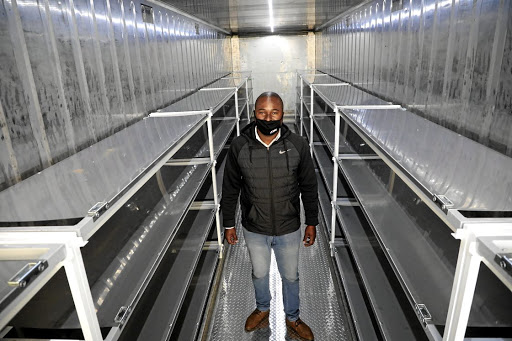 Avbob manager Vusi Dladla inside one of the shipping containers his company is converting into mortuaries to keep up with demand. / ANTONIO MUCHAVE

One of SA's biggest funeral parlours has begun converting shipping containers into mobile mortuaries in anticipation for a spike in Covid-19 related deaths.

Avbob has already produced nine mobile mortuaries from a factory in Bloemfontein to ensure it does not run out of space when Covid-19 deaths are at a peak.

Three of these mobile mortuaries will be in Gauteng - Springs, Auckland Park and Midrand.

The 12m x 3m containers can store 40 bodies and run on electricity and generators. On average, most of Avbob's 39 branches with mortuaries take between 25 and 30 bodies.

"The concept comes from our corporate social investment projects. Many years ago, we started buying these shipping containers and converted them to libraries which we donated to schools. So far, 55 of these container libraries have been donated," said Vusi Dladla, Avbob area manager of funeral services.

"With the Covid-19 rise in infections, our factory decided to convert these containers into mobile mortuaries. We've decided to build these units so that if there is a peak or a huge spike in mortality, then we can deal with it," Dladla said.

"We obviously have placed these three containers in Gauteng due to the demand projections in the province. Should the need arise, we will get more mobile mortuaries and place them at our branches."

Since the government moved national lockdown from level 4 to 3, Covid-19 infections have increased exponentially. It was during this stage that Gauteng overtook Western Cape and became the epicentre of the pandemic.

As at July 18, Covid-19 cases in Gauteng were 128,604, with 58,512 recoveries and 956 deaths. Last week, health minister Zweli Mkhize warned that the number of hotspots was increasing drastically.

Mkhize said that in May, South Africa had just 12 hotspots but this had increased to 52 in July.

Hotspots are areas with more than five infected people per 100,000, or where new infections are increasing at a fast pace. At the beginning of the national lockdown, the government projected infections to reach a peak in September.

The rate of infections got so high that the Gauteng executive requested national government to tighten regulations to arrest the rise.

Deputy president of the National Funeral Directors Association Lawrence Konyana said members have started beefing up their storage in anticipation of an upcoming peak in deaths due to Covid-19.

"We are currently doing an audit for us to see what is the capacity of each region in the country. We were approached by the government wanting to know what kind of capacity we had. We had to go to our members to establish what capacity do we have," he said.

"This included other associations as well. We wanted to complete the process by last month but could not do so. We are hoping that by the end of this month we should have an idea of what we have in Gauteng and other regions."

Konyana said demand for storage is manageable depending on what other role players involved in burials do.

He said if municipalities provide burial space on time, home affairs issues documents promptly and insurance companies pay claims early, the industry should be able to cope with high numbers.

This, Konyana said, was also due to the fact that Covid-19 positive bodies have to be buried within three days which frees more space.