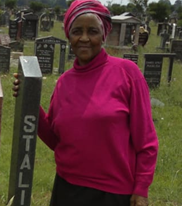 Struggle veteran Mirriam Setshego Martin died in a fire at her home in Meadowlands, Soweto, on Saturday morning, her family confirmed. She was 84.

Family spokesperson Moemise Motsepe said the house caught fire at about 4am.

He said the family suspected that Martin had finished her routine predawn reading of the Bible, this time with the aid of a candle because of load-shedding, resulting in accidental fire caused by the burning candle.

Her grandson, Elijah, who was sleeping in another bedroom, was “woken up by the smell of smoke but it was too late, my beloved granny lay lifeless in her bed”, he said.

Martin's uncle, black business stalwart Dr Sam Motsuenyane, said the family was “deeply anguished that the deceased passed in a blaze of fire after having survived cancer and high blood pressure for so many years”.

“It is a tragic and painful end, and what makes this particularly hard to bear is that her mother, who was my elder sister, lost her life after a primus stove exploded and the paraffin engulfed her in a raging fire. Any other way, perhaps, but not death by fire,” Motsuenyane said.

A post-mortem examination would  be conducted by the Forensic Pathology department, after which Martin's remains would be released to the family for burial, which is planned for Thursday, July 23 at the Anglican Church in Zone 7 Meadowlands, Motsepe said.

Martin worked in different capacities at a clothing manufacturing factory in Johannesburg for many years, where she was active in the trade union movement as one of the activists who were at the forefront for better working conditions and benefits.

For decades she served as a courier in the liberation movement, alternating between Swaziland, Mozambique, Botswana and Zambia to transmit classified messages, documents and maps for Umkhonto we Sizwe (MK), the former armed wing of the then banned ANC. She also actively helped many youths to skip the country to join MK.

It was because of these activities that she endured arrests, torture and harassment by apartheid police, but never relented. She was a member of the ANC Women’s League and participated actively in community-building initiatives, Motsepe said.

“When the ANC first arrived in exile after its banning in 1960 many leaders and members were given residence in Moses Motsuenyane’s farm in Lusaka, Zambia. Moses was my elder brother and the deceased used visits to her uncle, who was a priest, as a decoy for her underground work in the struggle. She long earned the respect of many for her courage and commitment to the quest for freedom. What a wonderful person she was, soft-spoken, generous and infinitely kind,” Dr Motsuenyane reminisced.

Born in Eignaarsfontein in the Potchefstroom district in 1937, Martin, née Ngakane, grew up in Walmansthal, near Pretoria, and later moved to Alexandra where she did her schooling. She was the eldest surviving daughter of Teti Ngakane née Motsuenyane and Ntitswe Ngakane. She had two children from her marriage with Gilbert Martin  — Stalin Ngakane, who died while exiled in Lusaka in 1994, and Shirley Martin, a former member of MK and the SANDF, who died in 2010.

She is survived by her grandchildren Lerato, Elijah and Tshepo as well as her siblings Elijah, Anna and Bogatsu.