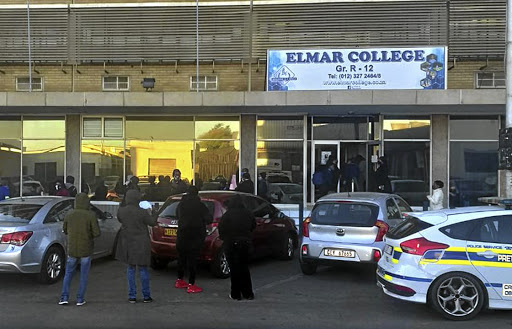 Parents have forced a Pretoria West private school to close its gates as it has reported positive cases of Covid-19.

Concerned parents gathered outside Elmar College yesterday after they were informed that a learner tested positive for Covid-19 about a week ago but the school continued operating.

Speaking on behalf of the parents, Albert Gwazani said they were saddened to learn that the school did not follow due process in notifying them about the learner who tested positive for Covid-19.

"The school was never sanitised, instead the school principal said only the grade 8 class learners were sent home. While addressing learners who refused to go to class, he could be heard in a recording by one of the learners saying 'to hell with corona', his focus is on making sure all grade 12 learners pass," Gwazani said.

The parents handed a memorandum to the principal, demanding the school be closed for a period of two weeks to allow for the exposed children to be quarantined.

Part of the memorandum read: "During this period, the school must be decontaminated, disinfected and deep- cleaned according to standards set by World Health Organization, and this should be done after each positive case.

"... There should be change of policy as a result of Covid-19 to allow parents representatives to form part of all major decisions that directly affect our children. We demand a school-governing body structure to be formed."

Gwazani said the principal accepted the memorandum and agreed that the school should be closed for 14 days. "We managed to find each other with the school even though there are still pending issues."

A message sent by the school to the parents read: "We would like to inform you that Elmar College is fully compliant with the sanitation and disinfecting procedures.

"There were three confirmed cases of corona.

"The school will be closed with immediate effect for two weeks.

"The school will re-open on July 29 and learners currently at the school need to be collected immediately."

Sowetan could not reach the school officials for comment as the management team was reportedly locked in a meeting.

They promised to call back after the meeting but they still had not called by the time of going to print.

Parents stressed about home schooling without access to internet, resources

It is unlikely that children are worse off at school than they are at home when it comes to Covid-19 transmissions, says president of the South ...
News
1 year ago

On Monday morning, I received an SMS from my younger brother's school. It said: "Dear parents. We have a positive Covid-19 case. Please come fetch ...
Opinion
1 year ago
Next Article