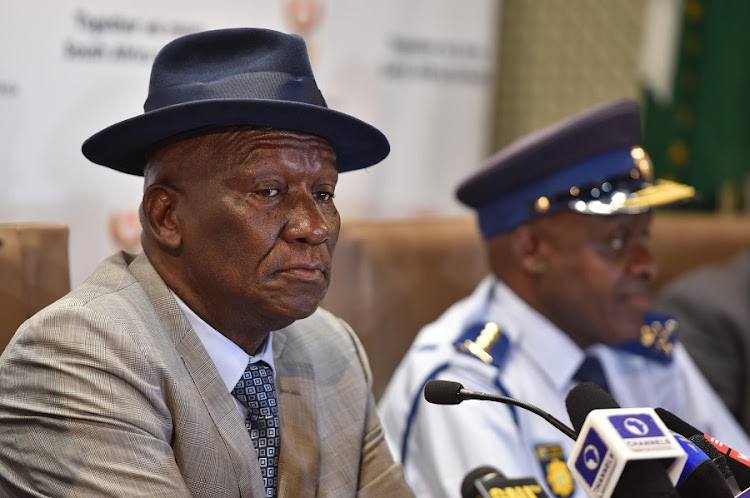 Minister of police Bheki Cele says police will not shy away from enforcing the latest lockdown regulations.
Image: NTSWE MOKOENA

He added that "7,021 SAPS members and 2,203 correctional services officials have been confirmed positive for Covid-19”.

The minister added that crime hotspots were being noted in provinces with the biggest increases in Covid-19 cases.

“Western Cape, followed by Gauteng, Eastern Cape and KwaZulu-Natal, are also provinces giving us problems when it comes to crime. We have discovered that Covid-19 hotspots are also crime hotspots.”

He said that 4,949 police remain in isolation and 150 of them are in hospital, while 15 inmates have died.

At a media briefing held by ministers of the justice, crime prevention and security cluster, Cele also raised concerns about an increase in social gatherings before and after funerals.

“The night vigil before the burial and the so-called 'after tears' following the burial remain prohibited gatherings. No alcohol may be consumed at the actual funeral either,” Cele reminded South Africans.

President Cyril Ramaphosa announced on Sunday that minibus taxis would now be allowed to run at 100% capacity on local trips, while 70% capacity is allowed for long-distance trips. However windows of the vehicles must be open. Cele said criticism on the mandatory opening of windows during taxi trips, on the basis of weather, was not his concern.

“We were not told as the police what to do when it is cold, except that the windows must be open on public transport, there have to be sanitisers, masks and passenger limits must be adhered to.

"We hope you (commuters and drivers) are not going to give us a job by not complying but if you do, we will take the job of dealing with those matters,” he warned.

Cele sent out a stern warning to those who refuse to wear masks, do not comply with the alcohol and cigarettes ban, or break curfew rules.

"Law-enforcement officials have been instructed to act resolutely to enforce compliance with the regulations, arresting those who breach the regulations and ensuring that they are successfully prosecuted. Convictions will result in either fines or jail terms depending on the discretion of the court. If anyone is caught doing so, they will also be prosecuted.”

Members of the public are required to produce a permit or state a valid reason should they be caught outside between 9pm and 4am. Those who fail to comply will be committing an offence and can be charged accordingly.

Cele appealed to the public not to buy alcohol during this time, as all alcohol sales are illegal.

The mere thought of going back to work has been nerve wracking for Alica Maart, a nurse working at one of the private hospitals in Cape Town. She has ...
News
1 year ago
Next Article