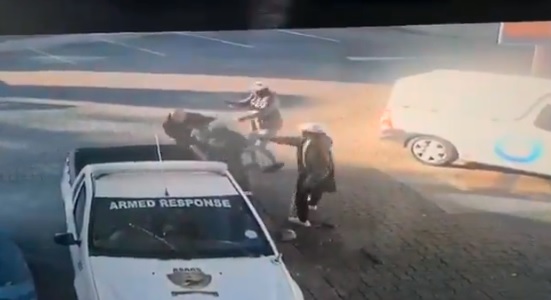 The armed gang ambushed the guard while he was cleaning his company car’s windscreen and disarmed him.
Image: Screengrab of video

A security guard was shot and wounded by robbers while cleaning his windscreen at a petrol station in Brixton, Johannesburg.

They took an undisclosed amount of money, car keys and a cellphone.

When they went outside, they spotted the security guard, he said.

They ambushed the guard while he was cleaning his company car’s windscreen and disarmed him.

During the altercation, the guard was shot in the leg.

He was subsequently taken to hospital.

Masondo said police traced the gang to Denver and recovered the vehicle used to commit the crime.

Two men have been taken in for questioning.