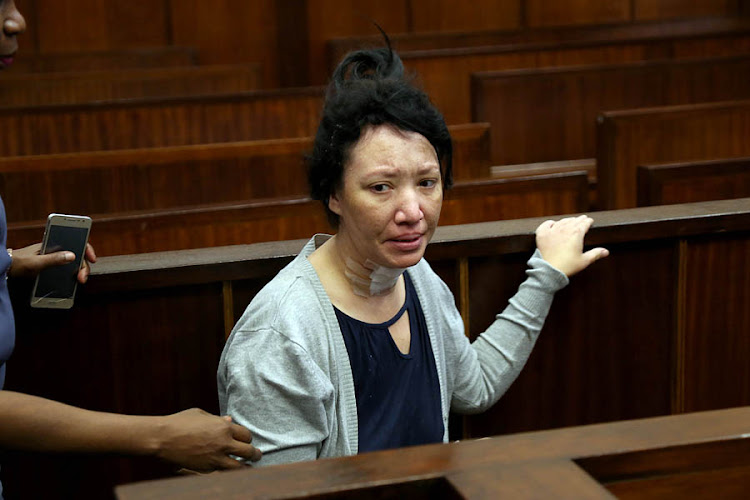 Megan Prins, who was accused of killing her seven-year-old son, has died, her lawyer said.
Image: THULI DLAMINI

Durban mom Megan Prins, who was due to stand trial this week on a charge of murdering her seven-year-old son, has died, authorities have been informed.

Her attorney, Burt Laing, said: “She passed away on July 1.”

Her matter was on the roll of the Durban high court for Monday July 6.

NPA spokesperson Natasha Kara said: “The court was advised that the accused had possibly passed away. The state is awaiting confirmation in the form of a death certificate. The matter has been postponed to July 27.”

Her trial had initially been set down for October last year but had to be adjourned because a report from a private psychiatrist had not yet been received.

It was then set down to begin in May, but was adjourned because of the court’s closure during the lockdown.

The private psychiatrist's report was expected to shed light on whether Prins knew the difference between right and wrong when she smothered her son at an Umhlanga bed and breakfast establishment in July 2018, and whether she could act in accordance with that.

Three state psychiatrists had already found her fit to stand trial after assessing her at Fort Napier Hospital for a month, but it was expected that she would raise a defence of “temporary insanity”.

Durban mom Megan Prins, who is accused of murdering her seven-year-old son Sloan in July last year, is likely to raise a defence of “temporary ...
News
2 years ago

At the time of the alleged crime, Prins, who was a registered nurse, was living with her son Sloan at a flat in Kensington Heights, in Morningside, Durban, after a break-up in the relationship with his father.

In the indictment, the state alleged that money issues and the fact that the father had become involved in a new relationship had angered Prins.

She planned to murder the boy and commit suicide. She checked into the guest house, gave Sloan adult medication to put him to sleep and then smothered him.

When she first appeared in court, Prins had visible injuries to her neck. During her bail application she said she had suffered from major depression and was facing financial ruin.

She said at times, there was only enough food to feed Sloan and she would go hungry. She believed she was going to lose her home and she felt abandoned and helpless.

Her brother Adrian Prins testified that she was destroyed by what had happened.