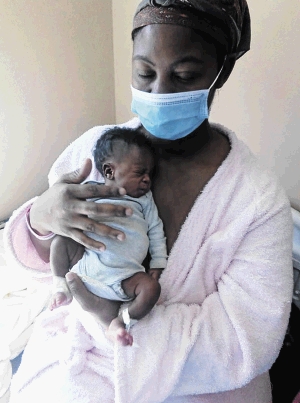 Nthabiseng Masenya and baby Boiketlo who has developed an unexplained infection on her ankle.

The mother of a two-week-old baby fears that her daughter could lose her leg after an infection from a drip needle left her with a gaping wound.

Nthabiseng Masenya, 31, blamed Mamelodi Hospital for gross negligence that she alleged left her daughter, Boiketlo, with the injury on her ankle after birth.

Masenya said her newborn baby had to be put on an oxygen machine and a drip for three days two weeks ago.

"They said she had a shortage of blood and as a result was put on another drip for blood transfusion after I was asked to donate blood for her," Masenya said

However, she said a week ago her daughter was left with a swelling on the ankle where the drip was administered and the wound just kept growing by the day and won't heal. Sowetan has seen the wound, which appears to be an infection around the infant's ankle, where the drip needle was inserted.

"It's been more than a week now since the wound has developed but nobody has told me what's happening or if my child will be able to walk or not. It seems nobody knows."

Masenya has lodged a complaint of gross negligence with the hospital.

Family to sue for their son's murder.
News
1 year ago

The family of a 27-year-old woman who died after giving birth to twins at a Limpopo hospital has launched a multimillion-rand civil claim against the ...
News
1 year ago

This is not the first time the hospital staff has been accused of negligence.

In May last year the hospital was thrust into the spotlight after a video showed 76-year-old Martha Marais tied to a bench. The Human Rights Commission found that the institution had "critical shortage of staff and the physical infrastructure was too old to cater for the growing population in Mamelodi".

"There should be consequence management and should the infant's leg be amputated, her life will be drastically change," he said.

The hospital confirmed that an investigation has been launched into what happened to Boiketlo but wouldn't respond to further questions.

Masenya and the baby's father, Nicholas Sebati, said they wanted the hospital to prioritise the matter and attend to the child's widening wound.

"My baby is obviously in pain as she cries nonstop even when you slightly touch any part of the injured leg," Masenya said.

The mother of three said she was worried that even when the doctors visited the baby they seemed not to prioritise the wound on the leg.

"Doctors seem to be only interested in the baby's development, most of them just ignore the wound which is worrying me more," she said

Sebati said he was already considering taking legal action against the hospital.

"I can't go to work, my wife is forever crying. We don't know if our daughter will be able to walk," Sebati said.