Conflicting reports on full hospitals in the Eastern Cape 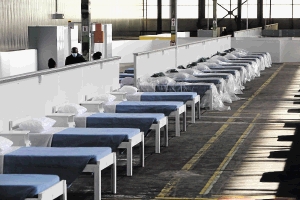 The Rev Dr Elizabeth Mamisa Chabula-Nxiweni field hospital in Port Elizabeth, a former VW factory. Planned field hospitals in other parts of the province are not operational. / WERNER HILLS

The worst fear of people in the Eastern Cape is now a reality - hospitals in the province are full, while the Covid-19 pandemic is still only approaching its peak around the country.

Two special advisers to the provincial health department called on Sunday for urgent steps to avoid a catastrophe, including transporting Covid-19 patients from other regions to the two field hospitals in Nelson Mandela Bay (NMB).

There was no firm response from government on why field hospitals are not yet operational in the eastern part of the province, and a large nurses' union said it was unaware hospitals had reached their full operating capacity.

They agreed something had to be done immediately to prevent a catastrophe. According to the health department, close to 1,500 virus infections are now being recorded daily at healthcare facilities.

Goqwana said: "I have not yet met the premier but I wanted to ask that he opens the field hospitals in Nelson Mandela Metro to the rest of the province. We have a crisis on our hands as the hospitals are full of Covid-19 patients.

The defence force has deployed 52 health care workers to the Eastern Cape.
News
1 year ago

"It's a fact that hospitals are now full and patients who are seeking help with other illnesses have to wait. We need to make a decision as a province to open up the field hospitals to everyone in the province."

He intended making the suggestion at Sunday's meeting of the provincial advisory board.

"With the rise in infections I suspected we might find ourselves in this situation. The people who must be admitted are those with shortness of breath who might need ventilators. We expected this and those field hospitals can ease the pressure on our hospitals."

Pillay said if weren't for the Bay's two field hospitals relieving the pressure on hospitals, the situation would be much worse on his side of the province.

"All the hospitals are full in Nelson Mandela Bay and Sarah Baartman, both private and government hospitals.

"We've managed to take patients from Dora Nginza and Livingstone hospitals to the field hospitals, and that gave these hospitals some relief."

The impact of an approaching coronavirus "storm" is being felt the Eastern Cape as patients overwhelm some public hospitals, clinics close as staff ...
News
1 year ago

Sodidi said the union met health MEC Sindiswa Gomba and superintendent-general Dr Thobile Mbengashe at the weekend, when a different picture had emerged about the hospitals and even their members were not reporting overflowing hospitals. "Mbengashe said the hospitals were not operating at full capacity.

"But his fear was that now that we are reaching the peak of the virus, infections in the province can easily climb to 1,500 per day.

"Their concerns were that if things continued this way our hospitals may overflow. No one has reported to the union that hospitals are full.

"If this situation doesn't change we might face a catastrophe of hospitals overflowing with patients and people might die outside the gates."

The health department intended to have a field hospital in each of the eight districts in the province, providing 4,000 beds in total.

Mabuyane's spokesperson, Mvusi Sicwetsha, did not comment on why the field hospital rollout plan had not been met outside of NMB. He said the provincial government had awarded 42 contracts worth R222.8m to Eastern Cape-based contractors for refurbishment of 34 health facilities in the province for Covid-19.

"These projects are at various stages of implementation with 20 projects having already been completed, 12 planned to be completed by the end of July and completion of the remaining 10 by the end of August. We have recruited an additional 1,000 nurses and more than 5,000 community health workers as part of the Covid-19 response team."

We’re ready to deal with spike in infections, says Mkhize

Health minister Zweli Mkhize is sending additional reinforcements to the Eastern Cape to strengthen the health department’s efforts in fighting ...
News
1 year ago

Eastern Cape premier Oscar Mabuyane on Tuesday reassured the country that his province was doing everything in its power to contain the spread of ...
News
1 year ago

South Africa passed another grim Covid-19 milestone on Monday, as it surpassed the 100,000 mark for confirmed infections. This is less than three ...
News
1 year ago
Next Article