City of Johannesburg given until Friday to pass budget 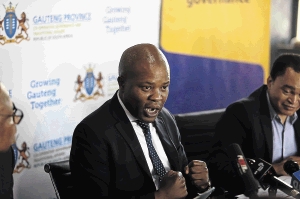 The City of Johannesburg has received a momentary reprieve from the Gauteng provincial government, which gave the metro's council until Friday to pass its budget.

The metro, a hung municipality which is governed by an ANC-led coalition, is in a race against time to pass its budget this week, after it failed to do so last week. Johannesburg, the richest city in SA, was supposed to pass its budget by Wednesday last week, the start of the new financial year for municipalities.

This was not done, however - kicking into motion constitutional provisions that spell out what action should be taken against municipalities that fail to pass their budgets by the start of the next financial year.

The worst-case scenario for the municipality is that the council can be dissolved, with an administrator appointed before a new council is elected.

The deadline was missed after a meeting on Tuesday last week was adjourned to Thursday to allow political parties represented in the council to "consult". The Thursday meeting was then postponed "until further notice".

Yesterday, Gauteng co-operative governance MEC Lebogang Maile said the province's executive council, which met on Saturday, had decided to issue directives to the city, in line with provisions in the constitution. Maile said the council had to urgently convene to approve its 2020/2021 budget by no later than July 10.

The City of Johannesburg has postponed indefinitely a council meeting meant to consider the 2020/2021 to 2022/23 draft medium-term budget.
News
1 year ago

Until the budget is approved, Gauteng's finance MEC has to approve all expenditure that has to be incurred, he said.

He said co-operative governance & traditional affairs (Cogta) minister Nkosazana Dlamini-Zuma, the National Council of Provinces (NCOP), the Gauteng provincial legislature and the SA Local Government Association (Salga) in Gauteng have been informed of the intervention by the executive committee.

"MEC Maile expects that the municipality will comply with the directives ... and act in the best interests of the residents of the city.

"To that end, the MEC urges all political parties in council to put the interests of the residents of the city first," said the department in a statement.

"The city will endeavour to satisfy all its obligations and we remain confident that a budget will be passed within the timelines set. This will allow us to ensure that the work of providing services to the residents of Johannesburg and responding to the needs of the most vulnerable and poor within the city continues," he said.

The City of Johannesburg has postponed indefinitely a council meeting meant to consider the 2020/2021 to 2022/23 draft medium-term budget.
News
1 year ago

The City of Johannesburg is seeing a lower mortality rate, a higher recovery rate and fewer active cases of people with Covid-19 during the lockdown.
News
1 year ago
Next Article