Bheki Cele mum on number of officers used in lockdown 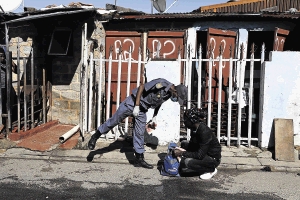 The army and police handed out informational pamphlets to residents on the streets of Alexandra township in Johannesburg as part of their duties during the lockdown. / ALON SKUY

Police minister Bheki Cele has declined to say how many police officers are deployed to enforce the Covid-19 lockdown regulations, citing "security reasons".

Cele did reveal that the police service was struggling to recruit and fill vacancies because of the Covid-19 pandemic.

"Members of the SAPS and reservists were and still are deployed for future operations, for policing services and for enforcement of the Covid-19 preventative measures. It is preferred the figures are not provided for security reasons," he said in a written parliamentary response to a question from IFP MP Zandile Majozi.

Majozi wanted details about police officers and reservists deployed during the different stages of lockdown.

Cele said the filling of vacancies in the service was continuing, but it was not possible to enlist new members to report to training academies because of Covid-19 restrictions and protocols, which include social distancing and a limit on large gatherings and physical training.

"The process of finalising the SAPS 2020 trainee intake was at an advanced stage but was unfortunately suspended until further notice by the minister of police because of the national disaster and then the lockdown," said Cele.

He said the SAPS recruitment plan was being reviewed in order to respond to the lockdown restrictions. Cele also revealed that 4,971 new recruits had successfully completed their training as of December 13 2019.

Cele has nominated Jennifer Dikeledi Ntlatseng as his preferred candidate for appointment as executive director for the Independent Police Investigative Directorate (Ipid).

This was revealed in a letter, dated June 30, which Cele wrote to National Assembly speaker Thandi Modise.

Police minister Bheki Cele says 14 police officers have died from Covid-19, with the number of infected officers now at 1,685.
News
1 year ago

Caught buying, selling cigarettes? You will get a criminal record: Bheki Cele

Police minister Bheki Cele says those caught buying or selling cigarettes will be prosecuted and, if found guilty, would have a criminal record
News
1 year ago

The man who was dragged naked from his Cape Town shack on Wednesday has appealed to President Cyril Ramaphosa to help him reclaim his dignity.
News
1 year ago
Next Article