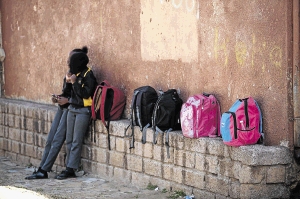 Many schools would not be ready to welcome learners today as they are still waiting for PPEs from the department of basic education. Only grades 6 and 11 will return to school at some provinces, while grade Rs will return at a later stage.
Image: Gallo Images/Papi Morake

Pupils in three grades are returning back to school nationwide today amid chaos, frustration and confusion as some provinces are not yet fully ready to resume with learning.

A number of schools were still anxiously waiting for the delivery of personal protective equipment (PPEs) yesterday when basic education minister Angie Motshekga announced that a staggered return to school approach for millions of pupils, who have been home for three months due to the Covid-19 pandemic, will be followed.

This will now see only grade 6 and 11s returning to class while grade Rs will only return to school in some provinces.

Other provinces, including KwaZulu-Natal, are not yet ready to welcome back grade R pupils.

The department was forced to make yet another last minute U-turn on Thursday last week, amending its plans for grades 1, 2, 3, 6, 10 and 11 which were all expected to return to school tomorrow.

"On Thursday, July 2 2020, the Council of Education Ministers (CEM) considered a number of variables, which inter alia included the rising community infections across the country, and the risk adjusted differentiated approach in dealing with the returning grades to school."

Basic education minister Angie Motshekga says the school nutrition programme has resumed for grade 12 and 7 pupils in all provinces.
News
1 year ago

Motshekga added: "This is what made CEM to consider staggering the returning grades, which were planned to return on the 6th of July 2020 and the 3rd of August 2020. Firstly, CEM agreed that only grades R, 6 and 11 will return to school [today]."

Motshekga said they had also noted that provinces are at different levels of readiness for return of grade R learners.

"Therefore, CEM agreed that those provinces that are not ready to receive grade R on 6th of July 2020, must provide strategic and realisable plans for ensuring the reincorporation of grade R learners to schools within, but not later than the end of July 2020," Motshekga said.

In June, when grade 7s and grade 12s returned back to school, their return had to be delayed by a week after education stakeholders, including school governing bodies and teacher union, raised issues with lack of PPEs in most schools. The two grades were supposed to be back in school on June 1, but only returned on June 8 while there were a number of chaos, especially in the Eastern Cape who were still awaiting the delivery of PPEs.

The ANC and its alliance partners in the Eastern Cape believe that all grades, with the exception of grade 12s, should return to school next month.

In a joint statement, the alliance stated: "In considering the state of education and the impact of reopening schools, the alliance is of the firm view that in the interim period, schools must remain closed except for the grade 12 learners to return to school."

"Experience is that the provinces don't take health and safety issues seriously. They don't appreciate the poor conditions in the schools. The rise in infections in the country warrants a review in risk assessment and stop the phasing in of the other grades," he said.

A Durban father filed an urgent application on Friday asking the high court to order the Durban North Primary School to allow his two children back ...
News
1 year ago

The PPEs are once again a big problem for the department as a school principal from Ivory Park, Johannesburg, was one of those hoping to get PPEs only delivered this morning.

"Our school is ready to welcome the grade 11s, but we are still waiting for PPEs hopefully they will be delivered tomorrow [Monday] morning," he said.

A teacher from a Soweto school said they were told PPEs would be delivered on Sunday (yesterday) just in time for today.

"I guess if the PPEs are not delivered we will have to turn the pupils away. Some of these pupils cannot afford to buy a face mask," she said.

Tim Hlongwane, acting president of South African Principals Associations in Gauteng, said due to theft of PPEs, they decided to use only this weekend to deliver PPEs.

However KwaZulu Natal, North West and Limpopo provinces have since announced that grade R pupils would stay home.
News
1 year ago

"The delay to return other grades assisted us a lot. Our major challenge was that teachers who have applied for comorbidities have not been replaced, so with the delay of the return of other grades it will help a lot. We met with the MEC Panyaza Lesufi on Saturday and we were promised that posts will be made available from July 10. Otherwise by the end of today all schools would have received their PPEs," he said.

At St James Senior Secondary School, a boarding school in Cofimvaba, Eastern Cape, parents were told that grade 11 learners will not be returning to school today as some of the PPEs have not been delivered. One of the teachers said the department had promised to have the PPEs delivered by yesterday afternoon, but they were still waiting.