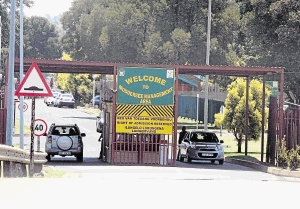 Modderbee prison in Benoni, Ekurhuleni, where warders are anxious about getting infected with coronavirus after two of their colleagues died allegedly from the virus.
Image: Veli Nhlapo

Employees at the Modderbee Prison in Benoni, Ekurhuleni, say they fear going to work after three of their colleagues died in just under two weeks with at least one of them confirmed to have succumbed to Covid-19.

A 42-year-old female warder from Leachville near Brakpan lost the fight for her life against Covid-19 on Thursday.

Sowetan understands that another female warder from Tembisa, working in the kitchen of the prison, also died on Friday morning allegedly owing to coronavirus.

The family of the 42-year-old woman confirmed to Sowetan that the mother of five died of Covid 19 on Thursday night after being admitted on June 25 at the Dalview Hospital in Brakpan.

However, Sowetan could not independently verify the death of the other warder with her families.

An employee, who did not want to be named, told Sowetan that she and her colleagues were in panic with all the deaths that were happening.

"I worked so closely with all the persons who died and I even work in the same areas as they do, I'm in real panic. They all were in [same] shift when they started having symptoms," said the employee.

The department of correctional services on Friday confirmed that a person employed at a Western Cape prison has died of the coronavirus.
News
1 year ago

"I get Covid-19 panic every day. I have anxiety, my throat just gets sore. I feel nauseous; I'm scared to be inside the facility because the facility has not been decontaminated and I feel like management is taking the virus very lightly," she said.

Another employee told Sowetan she felt unsafe at work because of the lack of safety precautions.

"People wear their masks on and off during working hours and because we don't know where the virus is coming from," said the employee.

"We still find workers who walk in groups, seating together during lunch and not keeping social distancing across all facilities," he said.

Nxumalo said the department has had 32 deaths across all prisons, with a total of 27,885 positive cases.

Police and Prisons Civil Rights Union (Popcru) spokesperson Richard Mamabolo said it was nonsense to blame prison workers for the rise of infections in prisons.

"Our warders across all correctional facilities have challenges of overcrowding... No member should be intimidated to silence or threatened to work under unsafe conditions. We encourage them to speak up, they have the right to refuse to go to work if they feel compromised and at risk," he said.