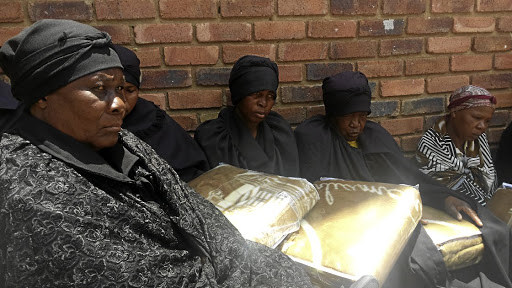 Some of the widows who attended the Widows Forum at the Kabokweni Community Hall in Mpumalanga in 2014 for the discussion of challenges they face, are attired in mourning clothes that should be removed in winter. /Sibongile Mashaba

In some African cultures in the southern region, the period June to August is regarded as a cleansing period for widows to remove their mourning clothes.

However, the lockdown regulations which do not permit ceremonies at the moment pose a challenge for people who need to hold such ceremonies to mark the end of the mourning period.

Cultural experts, however, said they need not worry as long they keep the ceremonies small.

The ritual of ukukhumulainzilo or ho hlobola thapo (to get rid of mourning attire) is one of those cultural rituals that cannot be postponed to avoid potential further misfortunes to befall the families, according to experts in cultural beliefs.

The ritual involves slaughtering of an animal and making umqombothi (traditional beer).

Cultural experts argue that the reasons behind the custom being performed at a particular time was because June to August period was the end of the year cycle and all things in nature are dying to come alive in the spring time, which is the start of the African year.

The experts say the removal of inzilo cannot be performed during warmer seasons, as it's a taboo that might attract tragic consequences for plants as that would be the ploughing season.

But they concede that black people in urban townships have forged their own practices differing to some degrees to original traditions which are still observed in rural areas.

To slaughter or not to slaughter? Debate and confusion under level 3

To slaughter or not to slaughter? The question has caused confusion between the government, traditional experts and cultural practitioners over the ...
News
1 year ago

Traditional healers have bemoaned their exclusion from helping the government deal with the Covid-19 pandemic, saying they have a lot to offer.
News
1 year ago

Though ceremonies are still not permitted during level 3 of Covid-19, traditional experts believe that the removal of inzilo can still be performed and families can observe the rules and regulations of having people less than 50, which would mean close family members only.

Traditional expert Celuxolo Nhlengethwa-Stewart, who is also known as Gogo Simenjalo, said widows should not start the new year (in September for southern Africa) with inzilo. She explained that the process of removing inzilo involves cleansing the widow in the river and burning her mourning clothes.

She further said that in the same process, the family is officially cleansing the spirit of the departed person to allow him/her to join other spirit ancestors.

"So this is the period to remove mourning gowns, ukuhlambulula (cleansing), and ukukhuphula umoya (the crossing of the spirit) of the deceased to allow him to be an ancestor (idlozi).

"Another reason is that traditionally, there should be no thunder and lightning during the period of slaughtering and preparation of ritual meat," Gogo Simenjalo said.

"In traditional rural communities, families that perform the cleansing of widows after August are fined. A number of rituals are performed in preparation for this widow-cleansing ritual. Most of the spiritual work performed by the family elders and healers precedes this ritual."

Sylvia Mthembu Manqele, who is a widow and traditional expert, said ceremonial removal of mourning clothes must be in winter and that she went through the same process when she lost her husband in 2012.

Manqele, from Imbali Yezwe Cultural Organisation, explains that the mourning period is normally a year for a woman who lost a husband through natural causes. "It is always shortened by the fact that you cannot prolong the mourning period, otherwise you are asking for trouble.

"I went through the same process and removed inzilo in winter because of the African culture.

"As I am talking to you, I know that people are already doing the process and will continue until winter ends," Manqele said. "I believe that people can observe the lockdown rules while doing the ritual because it cannot be delayed.

"They can only invite close family members because this is not a party. The usage of a goat and traditional beer is key in such ceremonies."

Former Ukhozi FM broadcaster and traditional healer Ngizwe Mchunu said winter ceremonies for removing inzilo is the right thing and that the tradition was still followed in areas under traditional leadership.