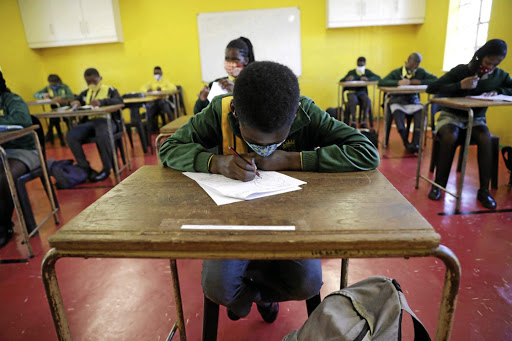 Grade 7 and grade 12 pupils at most schools have been back in class since June 8 in a phased reopening. More grades are set to return on Monday./ ESA ALEXANDER

Teachers' unions say the next phase of the reopening of schools for more than six million pupils is a ticking time bomb because the department of basic education failed to meet safety requirements for fewer pupils when the grade 7s and grade 12s started school on June 8.

The unions said the department did not provide support to schools and in some cases personal protective equipment (PPE) was not delivered.

Yesterday, while briefing the education portfolio committee, the department's director-general, Matanzima Mweli, said 81 schools across the country have not yet opened due to water and sanitation problems and protests.

The Professional Educators' Union (PEU) said the department had failed to deliver on Covid-19 compliance promises in the first phase of the reopening. PEU president Johannes Motona accused the department of putting the curriculum before the lives of teachers and pupils.

"A few days before the re-opening of schools in phase 1, the department put their head on the block to say during the first week, whatever was outstanding will be addressed. But there are still a lot of schools that don't have water and sanitation. There's still inadequate supply of PPE at some schools," he said, arguing for further consultation before more grades return.

South African Democratic Teachers' Union general secretary Mugwena Maluleka said: "They say they are ready, but we say it is not good to overload the system when they failed to manage two grades. The rise in infections in the country warrants a review in risk assessment and to stop the phasing in of other grades... There is nothing wrong in shutting down the schools in order to assist in curbing the spread of the virus."

National Association of School Governing Bodies general secretary Matakanya Matakanye said: "There are schools that are ready for the second phase, but there are also other schools that are not yet ready. Some schools don't have PPEs and there is still the problem of social distancing."

There are 200 Eastern Cape schools that remain closed due to the coronavirus pandemic, premier Oscar Mabuyane said in Bhisho on Tuesday morning.
News
11 months ago

The high court in Pretoria on Wednesday dismissed an application by Mmusi Maimane's One South Africa Movement (OSAM) which sought to set aside the ...
News
11 months ago
Next Article