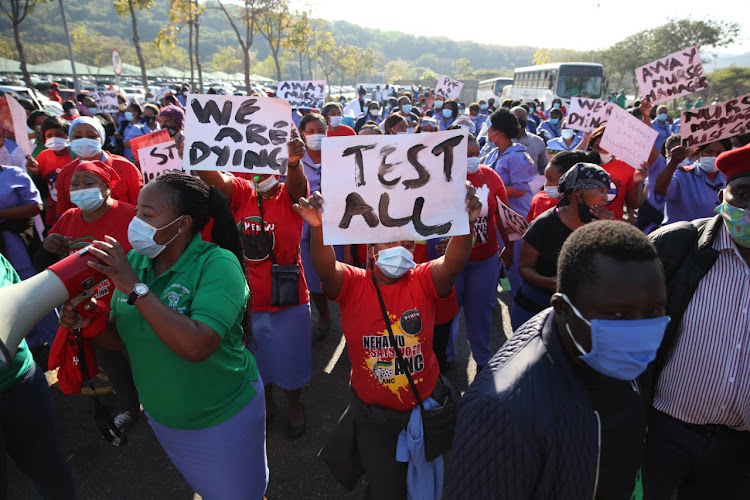 On Thursday, nurses under the National Education, Health and Allied Workers' Union (Nehawu) held a picket outside the hospital and handed over a memorandum to hospital management. Nehawu said the management “seem to have not only lost the battle in containing the spread of the virus but are failing to present a coherent plan to respond to the crisis”.

Ayanda Zulu, the provincial secretary of Nehawu, told media outside the hospital that the number of workers who tested positive was more than 100.

Linda Bambeni, who has been working at the hospital for six years, said they were understaffed in the ICU.

“When one of us tested positive they said that we wouldn't be tested because we are low risk. We don't understand what they mean by low risk and high risk because we are nursing these patients and you are exposed to the virus because sometimes the ventilators get disconnected. Our request is to be tested at least once a month but that is not happening,” said Bambeni.

Nehawu president Mzwandile Makwayiba said they did not expect nurses to go back to work and encouraged them to keep fighting until their demands were met.

“We cannot watch our members die. We will not be able to save them, but if they defend themselves and in the process they are dismissed, they will at least have their lives.”

Noluthando Nkosi, provincial health spokesperson, said the MEC was aware of the submission of the memorandum.

“The issues raised will be responded to as soon as she has gone through it. Where there are actions to be taken, necessary processes will be implemented and action taken accordingly,” said Nkosi.

At least 16 police stations have shut their doors since Monday as Covid-19 continues to hit the country.
News
1 year ago

At least nine police officers from KZN's Westville police station have tested positive for Covid-19.
News
1 year ago
Next Article