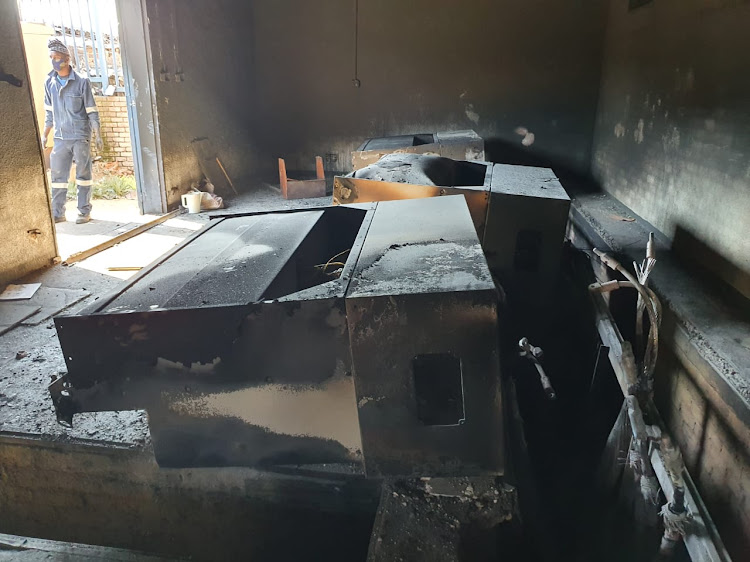 The burnt out substation that left residents without power in Alexandra.
Image: Supplied

Thousands of residents in Alexandra township in Johannesburg woke up to a second day without power on Thursday as technicians attended to a burnt out substation.

City power said residents had blocked the entrance to their depot on Wednesday evening, refusing to allow anyone in or out, hampering efforts to attend to breakdowns.

Almost half of Alexandra was plunged into darkness on Tuesday night after a fire that destroyed the Vasco da Gama switching substation.

City Power spokesperson Isaac Mangena said the outage was caused by what they suspected was an attempt to steal copper cable which caused a trip and an explosion.

“Areas plunged into darkness are from 1st Avenue to 20th Avenue, between Florence Mphosho/Vasco da Gama and Richard Baloyi streets,” he said.

Mangena said there had been instances were technicians were held hostage by communities who did not want them to leave until electricity was restored.

“[On Wednesday evening] in Alexandra because of several outages, including the one where there was a fire, we have had people blocking the entrance to our depot, refusing to allow people in or out, demanding that the electricity be restored.

“The areas where this kind of criminality is rife are Alexandra, Rubrich in Midrand and also Tshepisong, Leratong in Roodepoort but also even in the areas in Lenasia ... and some of the informal settlements in those areas,” he said.

He said these criminal acts were a stumbling block, causing delays in restoring electricity.

“We always ensure that we respond as quickly as possible but when there are these kinds of disturbances derailing our plans, we end up not doing the replacements and if it continues we will end up not responding, especially at night,” he said.

Mangena said in some instances, law enforcement authorities had to be called in to rescue city power officials.

“It's something that we cannot tolerate. These are some of the challenges we are facing and challenges that delay us in terms of restoring electricity.

Mangena said power was expected to be fully restored in Alexandra on Thursday evening.