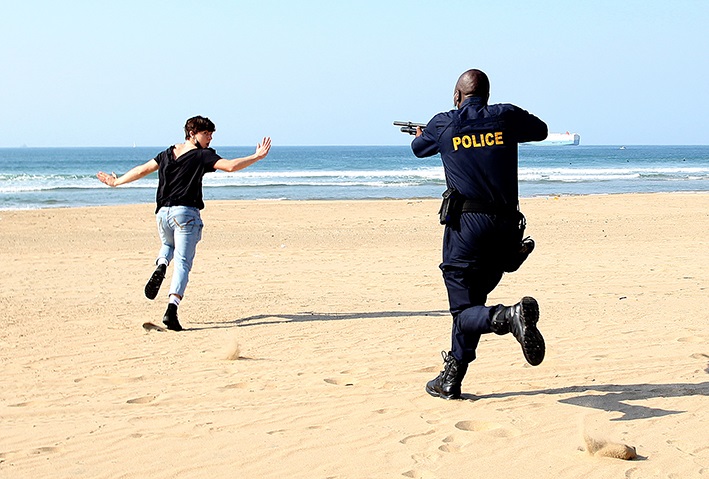 Julien Glenister, 17, pleads with a police officer who points a gun at him while chasing him for being part of an illegal GBV protest on Durban's South Beach.
Image: Sandile Ndlovu

A Durban teenager ran into the ocean during a gender-based violence (GBV) protest in an attempt to flee police who fired stun grenades and arrested protesters at the beachfront on Saturday.

Seventeen-year-old Julian Glenister told TimesLIVE on Monday that he was reluctant to give details about the incident.

“I am not too comfortable about talking about it. My adrenaline was pumping and everything happened so fast,” he said.

In a video shared on social media, the teen can be seen sitting on the promenade in protest before being approached by police in an attempt to either remove him from the area or arrest him.

Seconds later, he jumps up and runs towards the ocean - with police giving chase. Lifeguards were called to the scene to get him out of the water.

the South African justice system STAYS failing us. IG:@julianglenister got arrested today for being part of an anti-GBV protest today in Durban. tell me why they have time to chase the youth and arrest them for fighting for women and making a change instead of arresting rapists? pic.twitter.com/jzxNtEB7OD

Glenister, his sister and two friends were part of about 100 people who gathered for the demonstration, which was scheduled to be a march to the city hall. According to metro police, no application was made to their office, making the march illegal.

“There is a problem in South Africa with gender-based violence and I haven't seen much action being taken. I think that it is important to stand up for what you believe in. That's why I went to the protest,” said Glenister.

KZN police spokesperson Col Thembeka Mbele said the protesters who were arrested because the march was illegal were taken to Durban Central police station before being released with a warning not to return to the march.

“I probably will go to a protest in future, but this protest - from the start, there wasn’t any leadership there, so everyone kind of scattered and no one really knew what to do. I will probably go again, but I will be more cautious next time,” said Glenister.

“My close family were obviously very worried for me, but everything is fine at the moment. It would have been very different if I did get charged, but I didn’t and I am grateful for that.”

Demonstrators who had planned to March to Durban city hall to protest against gender-based violence have been arrested.
News
1 year ago