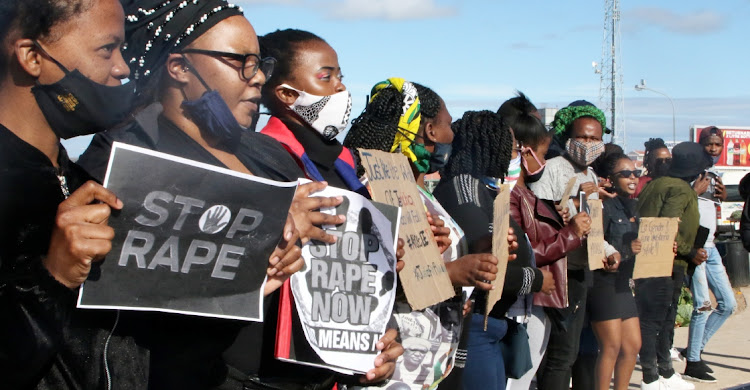 IN SOLIDARITY: Members of the Nelson Mandela Bay LGBTQI+ community protest at the KwaDwesi police where a rape complaint was laid against a Port Elizabeth pastor
Image: FREDLIN ADRIAAN

A group of the LGBTQI+ community members and allies gathered to picket at the KwaDwesi police station in support of a 29-year-old Port Elizabeth man who was allegedly raped by a well-known pastor in the Bay.

This after the alleged victim made accusations against the pastor, who is also a KQfm and BayTV presenter, on a Facebook post that has since been deleted.

He has denied the allegations.

The group held a picket outside the KwaDwesi police station where another alleged victim opened a rape case against the same pastor.

In the lengthy post, the 29-year-old detailed how the pastor invited him to his home in 2013 and allegedly forced himself on the alleged victim.

Screenshots, seen by The Herald, show messages from more victims — gay men — who allege the pastor had either raped, sexually violated  or attempted to rape them.

The 29-year-old said he had been triggered to post the alleged incident on social media by recent reports of rape and gender-based violence cases shared on social media in the past month.

“I was reading about the victims of rape that have been trending on social media and how women, especially children and gay people, are being killed and all that triggered me to share my story.

“I had been carrying this shame with me for years and, since I shared that post, I have felt a little lighter,” the 29-year-old said.

In the post, he said he had never reported the issue to the police because he wanted to put it behind him and feared that society would accuse him of seeking attention using a well-known man’s name.

“The reason I didn’t want to talk about this is because I was scared, I was alone and I was ashamed of what people would say on social media,” read part of the post.

Though he did not name the pastor on the original post, the 29-year-old shared screenshots, in the comments section, of a 2013 conversation between himself and the pastor after the alleged rape in which the pastor denies raping him.

In the conversation, the pastor denied raping him and claimed they had sex.

The 29-year-old was absent from the picket for safety reasons after several recordings of women threatening to find an beat him up surfaced on social media.

The protesters delivered a memorandum of grievances to the KwaDwesi police station in which they demanded  urgency and sensitivity in the handling of LGBTQI+ cases by police, LGBTQI+ protection units at all police stations, provision of psychosocial support to victims and survivors of gender-based violence against LGBTQI+ community members, among other grievances.

BayTV and KQfm have released statements following the allegations, saying the pastor’s respective shows have been withdrawn until his name is cleared.

The pastor  responded to the allegation on his Facebook page last week,saying he would address the matter via a Facebook live video.

He later cancelled the scheduled video and said he would communicate a way forward  “soon”.

Speaking to The Herald on Monday night, the pastor said: “I am not aware of any case that has been opened against me and I maintain that I am innocent.

“If the police contact me, I will let the law take it course.

“I have seen the [posts] by the alleged victims and I don’t know any of those people. I have never seen them before in my life.

“If their allegations are true, they must open a case against me.”

Police captain Andre Beetge confirmed that a case of rape was opened at the Motherwell station on June 24.

The second alleged victim on Monday filed a statement at the KwaDwesi police station. Police are yet to provide him with a case number.

Fake ‘pastor’ lures women through Facebook and rapes them

A 30-year-old rape suspect masquerading as a pastor, who allegedly lured his victims through social media, has been arrested, police said on Sunday.
News
1 year ago

The trial of human trafficking and rape accused pastor Timothy Omotoso and his two co-accused has been hit with yet another blow after it was ...
News
1 year ago

Mob torches church and cars of Mpumalanga pastor, accusing him of rape