Health minister Dr Zweli Mkhize is concerned that in recent weeks there has been poor or no social distancing in communities, abandoning of masks or masks not being worn properly, and a carelessness setting in around frequent washing of hands.
Image: Gallo Images/Darren Stewart

Health minister Dr Zweli Mkhize has appealed to South Africans to not “let their guard down” and to remain focused and disciplined during the fight against Covid-19.

“Every single South African now needs to focus on adhering to recommendations pertaining to non-pharmaceutical interventions.

“We are extremely concerned that fatigue seems to have set in, and South Africans are letting down their guard at a time when the spread of infection is surging,” Mkhize said.

He said in recent weeks there had been poor or no social distancing in communities, abandoning of masks or masks not being worn properly, and a carelessness setting in around frequent washing of hand.

He warned this would directly influence the rise in numbers in the next two weeks.

“Our ability to break the cycle of infection depends on our willingness to remain focused and disciplined, and take non-pharmaceutical interventions seriously,” said the minister.

In the coming weeks, Gauteng will emerge as the province with the highest Covid-19 numbers, Mkhize said.

“We are seeing a rapid rise in the cumulative number of positive Covid-19 cases indicating that, as we had expected, we are approaching a surge during the latter winter months of July and August.

“It is anticipated that while every province will unfortunately witness an increase in their numbers, areas where there is high economic activity will experience an exponential rise, beginning with Gauteng and the Western Cape and followed by the Eastern Cape and KwaZulu-Natal.

“We believe that within the coming days, Gauteng will emerge with the highest Covid-19 numbers. Factors contributing to this trend are inward migration, the large population (especially in metros like Johannesburg, Ekurhuleni and Tshwane), increased congregating which spurs cluster outbreaks, and the level to which people are able to adapt to new behaviours such as social distancing and the wearing of masks.

“When the national lockdown was eased to level 3, there was a large inward movement of people as economic activities resumed. The surge witnessed in the past two weeks has developed due to seeding of infections carried in by members of the community as they moved back into the workplace. It was therefore inevitable there would be cluster outbreaks as infections spilled over from communities into places of congregation such as mines, factories, taxis and buses.”

Mkhize said he had met with Gauteng health MEC Bandile Masuku and the provincial department to rapidly “ramp up” their screening programme capacity.

He said the testing backlog in the province is expected to be cleared soon, and the numbers would be based on a much shorter turnaround time.

The number of hospital beds in Gauteng had been increased, and the province would need to strengthen its contact tracing and quarantine or isolation uptake, he said. 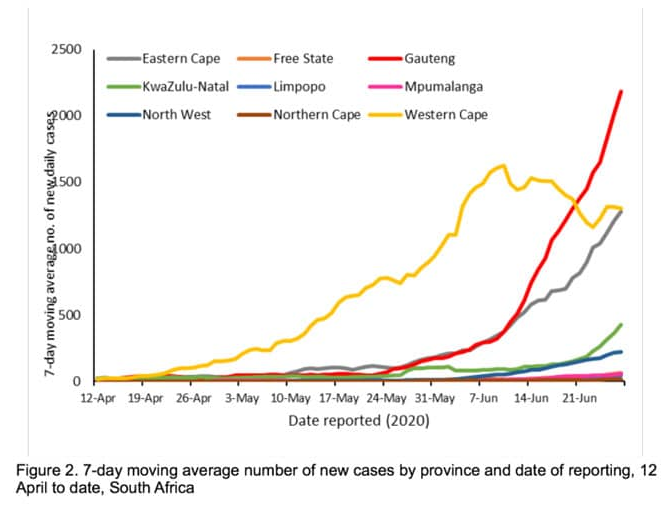 Mkhize said one of the key reasons for the high number of cases in the Western Cape was that the provincial strategy was mainly hospicentric, namely focusing on case management.

According to Mkhize, the province had not quite reached the surge in cases predicted by experts. However, the hospitalisation rate is increasing, with the Western Cape remaining the province with the highest numbers of admissions.

A Durban health worker, based at an ICU, took to Facebook to tell about how overwhelmed, shocked and afraid she and her colleagues are owing to ...
News
2 years ago

In the Eastern Cape, case management has come into the spotlight, Mkhize said.

“We wish to reassure the public that complaints on social media regarding treatment in some of the hospitals, as well as overall public health issues described in the media, have been well noted.”

He said experienced senior managers have been deployed to deal with the overall health systems management in the province and assist with the ground response.

Mkhize said his department was working on a programme with social scientists and a new multisectoral ministerial advisory committee on social behavioural change to attain fundamental reform at grass roots levels to save lives.

“It will be important to engage community, religious and traditional leaders who can motivate individuals to adhere to non-pharmaceutical interventions.”