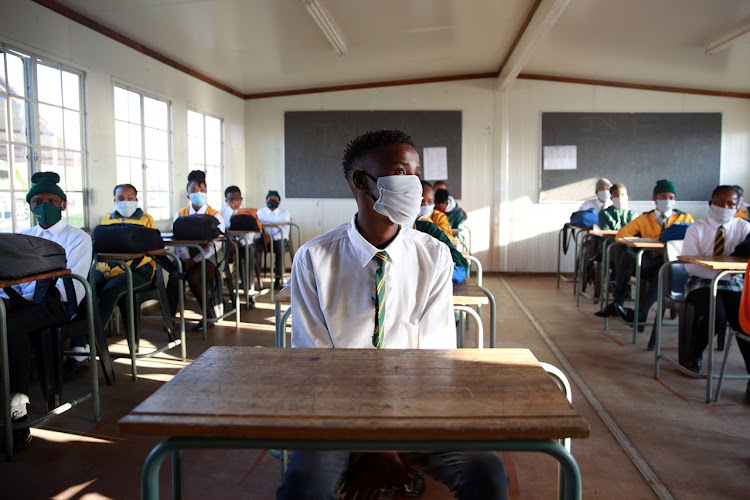 Learners and teachers at Olivenhoutbosch Secondary school have stared with teaching and learning, on the first day of schooling after, on June 8 2020 two months of no school due to Covid-19.
Image: Thapelo Morebudi/The Sunday Times

Mpumalanga police arrested 13 people, including a 77-year-old pensioner and a councillor at Seabe village in Mmametlhake, for allegedly trying to forcefully remove pupils from schools out of fear they would contract Covid-19.

Classes for grade 7 and 12 pupils resumed on June 8 across the country.

The group allegedly connived with each other and went to the Dikotelo Combined, Ramoshidi and Seabe High schools in Seabe village, where they were allegedly found driving around in two cars on the school premises. The group allegedly disrupted teaching and learning and pulled children from classes on Thursday.

“We see no reason why a section of parents would want to force the government to renege from its principled decision.

“It is therefore unacceptable that when police are responding to allegations of lawlessness, they discover that an elderly citizen as well as a public representative are the ones inciting such a despicable act,” Zuma said.

All 13 were granted R500 bail each and will be back at the Mbibane magistrate’s court on August 14.

The two vehicles were seized.

“As custodians of the law, we cannot allow this anarchy to rule and continue unabated, hence the arrest.

“I strongly hold a view that despite the concerns that people might have, they cannot be allowed to be unruly. I therefore urge the community to desist from perpetuating violence as a means to air their grievances,” Zuma said.

Demonstrators who had planned to March to Durban city hall to protest against gender-based violence have been arrested.
News
2 years ago
Next Article