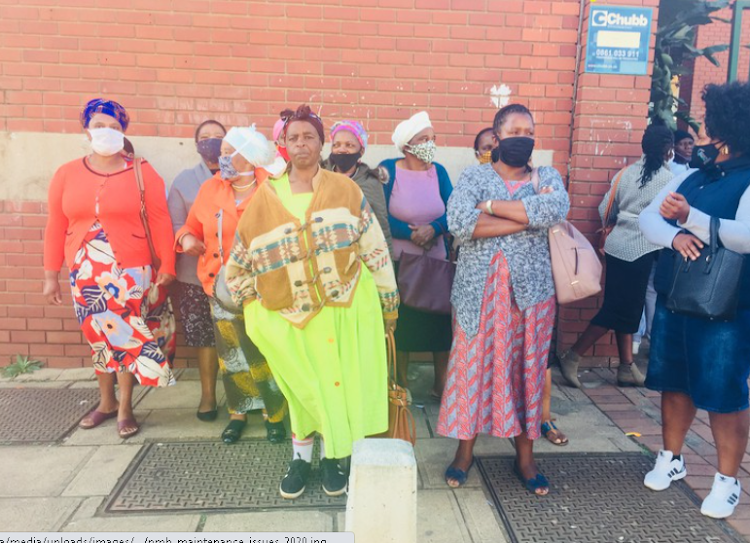 Some of the women who have not received maintenance payments since the start of the lockdown gathered outside the court in Pietermartitzburg on Monday to demand answers from officials.
Image: Nompendulo Ngubane

“I have not received maintenance payments since February,” says Ntombenhle Mthembu from Imbali BB township in Pietermaritzburg.

She was one of several frustrated mothers who gathered on the steps of the Pietermaritzburg magistrate's court earlier this week to get answers from officials.

Some say they have not received maintenance payments processed by court officials since the start of the lockdown while others like Mthembu have not been paid since February.

“The father of my children told me that every month the money is deducted from him. The security guards know us because we come here everyday. They tell us the problem is with their system. We hear that but when will their system work?” asked Mthembu.

She said each time the women went to the court, they were given a landline number to call but their calls were never answered. “The phone rings but no-one picks up,” said Mthembu.

Another woman from Sobantu, who asked not to be named, told GroundUp that her issues with the maintenance court preceded the lockdown. She receives money for her granddaughter who attends a tertiary institution in Port Elizabeth.

“My granddaughter depends on this money for her fees and rent. The court is failing us. We come to them having hope that they will do justice but right now it’s the opposite. Sometimes we would get paid and sometimes not. This pandemic is trying times but they have no mercy,” said the woman.

Phatheka Mbadu from Haniville said, “I’m tired of travelling. I borrow money from my neighbours to come to court. I’ve been told to go and check at the office in Durban. I was promised that I will get my money last Friday. I came today and they are singing a different tune.”

Mbadu was also told to contact a landline number for assistance.

Spokesperson for the department of justice and correctional services Chrispin Phiri said many departments were closed during the lockdown and could not process all payments.

Phiri told GroundUp that the court lost many payment requests when the system crashed on May 4. “Requests have not been reloaded as this data was not recovered,” said Phiri.

Phiri said beneficiaries of maintenance payments should tell courts that they have not been paid so officials could check the system and make the necessary payments.

Beneficiaries should bring a copy of ID documents or birth certificates and bank statements for the months that payments were not received. Phiri said the department could only process maintenance payments to one parent where the schedules of deductions from the other parent’s salary had been sent by the employer.

The Unemployment Insurance Fund (UIF) Covid-19 relief benefit has paid out more than R24bn, which has benefited almost 40-million laid off employees.
News
1 year ago

A retired bus driver was paid a whopping R4.7m in Covid-19 relief funds meant for 1,000 of his former colleagues.
News
1 year ago
Next Article