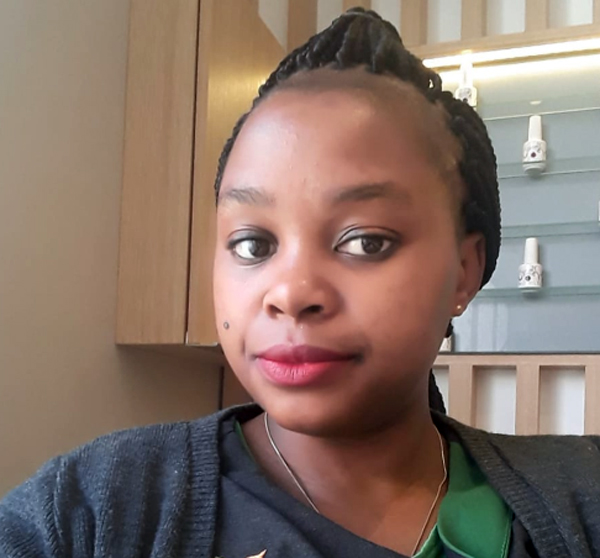 The owner of a Joburg spa has apologised after being on the receiving end of social media backlash for seemingly showing disregard to the plight of an employee who was asking about benefits relating to the Covid-19 Temporary Employer/Employee Relief Scheme (Ters).

A WhatsApp conversation about these benefits between the spa owner and her employee went viral on social media this week, sparking outrage over the employer’s tone during the interaction.

Screengrabs of the tense conversation were posted on Twitter and Facebook. In these, beauty therapist Precious Munyai, 26, who was employed at Aronia Day Spa in Houghton, asks her boss, Tasneem Patel, about the TERS benefits as she had not received the funds.

"You [are] being a damn pain. Ask the government,” a response from Patel read.

“Where the hell must I get a form from. Stop annoying me. I’m not the government, I’m not UIF … if you message again I’m going to block you,” another message read.

The messages angered many social media users, leading to calls for a boycott of the business.

Patel this week apologised for the "distress" caused to Munyai via the conversation.

"We fully realise that we were insensitive in this WhatsApp exchange and should have called our employee directly to explain the delay in her receiving payment," a letter posted on the company's Facebook page said.

Speaking to Sowetan on Thursday, Munyai explained her tough financial situation that led to her asking about payment.

"I have been struggling to survive, I was depending on this money to buy food," she said.

This is a conversation between an employer & an employee of a Day Spa called Aronia Day Spa Houghton. pic.twitter.com/qWlQiA7hvo

Speaking on behalf of his client, Patel’s lawyer, Munier Ismail, said she had apologised for the messages but felt harassed by the public after her picture was made public, allegedly by Munyai.

“At the outset, the WhatsApp exchanges could have been conducted differently, more appropriate to the plight of the employee and with more empathy and sensitivity. For this, the employer has already apologised unreservedly and this is the right thing to have done,” said Ismail.

“During lockdown and on behalf of this employee and all others at the spa and out of genuine concern for their wellbeing, the employer applied for Ters benefits for which they had become eligible. Most employees received their Ters benefits for April and May save for Ms Munyai, the employee in question, who received a payment for April but not for May 2020 and who then enquired via WhatsApp on the progress of this payment,” he said. 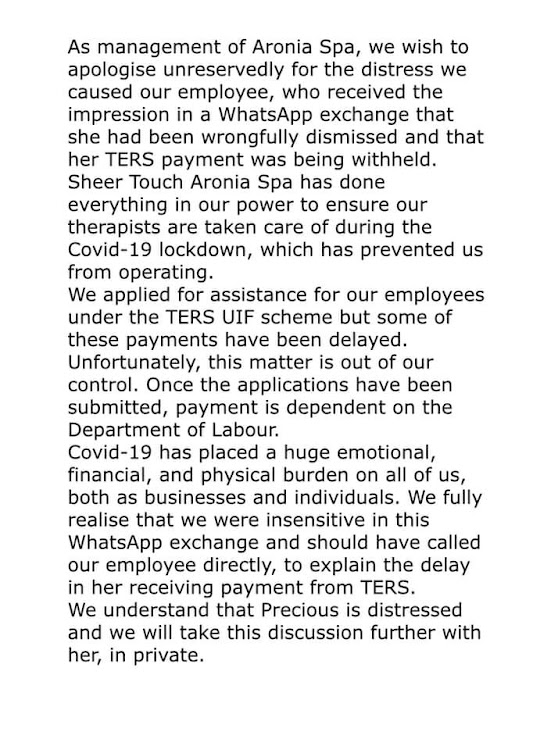 Ismail added that Munyai had been on a 12-month fixed contract that lapsed in March, and she had not been fired by his client.

Munyai confirmed to SowetanLIVE that she had received the Ters benefit for April but was shocked when she did not receive payment the following month.

Munyai’s lawyer, Bahiya Karolia, said she would refer the contractual dispute to the Commission for Conciliation, Mediation and Arbitration.

"I was told by Mr Ismail that his client would also be instituting a claim for damages against my client for defamation after her social media posts went viral. We have requested clarification on Ters (UIF) claims; however, there has been no substantive response. The UIF call centre has informed us that the non-payment of Ters must be handled by the employer," said Karolia.

Ismail said they would only pursue litigation if Munyai did not apologise and "set the record straight".

"The employer’s engagements with the UIF are ongoing and the attempt by the spa is in earnest, to endeavour to obtain payment for May 2020 to be released by the UIF and in turn paid over to Ms Munyai immediately," he said.

Resigning and cashing in your pension is a very drastic step you should not resort to unless all else fails.
Business
1 year ago

A retired bus driver was paid a whopping R4.7m in Covid-19 relief funds meant for 1,000 of his former colleagues.
News
1 year ago
Next Article