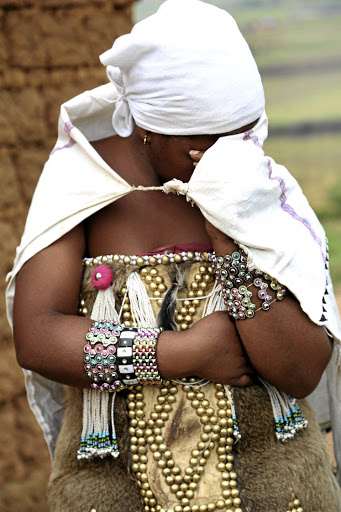 File image of a KwaZulu-Natal teenager, in her traditional Zulu attire, who dropped out of grade 11 to get married. Photograph first published in the Sunday Times on 12 November 2017.
Image: Jackie Clausen

Nine years ago, in a small Eastern Cape village, a 14-year-old girl was put into a taxi by her cruel aunt Zukiswa Bangi to be sold into a life of rape and abuse as a child bride under the twisted pretext of ukuthwala.

The horrific fate that awaited the young girl after her father, her only protector, died on December 7 2011 was laid bare in Cape Town's Wynberg Regional Court on Wednesday.

Bangi sat and fiddled boredly with the purple blanket around her waist in the dock as magistrate K Pillay explained through the Xhosa translator that the aberration of the traditional mock abduction of a bride for the purposes of initiating marriage negotiations would not be a defence in the case against her and her fellow accused.

To her right sat Malibongwe Gudwana, the 36-year-old man who “paid for” the young girl to be shipped to him from her home village. He clutched a worn Xhosa Bible with symbols scribbled across the edges of the pages reflecting one half of his belief system; the other half, he says, is ancestor worship.

Also to Bangi’s right sat Gudwana’s mother, 56-year-old Thandiwe. She has never been employed but practises as a sangoma.

Raised by an abusive parent who forced her into herding at a young age and who kept her from going to school, Pillay said one would have thought Thandiwe would have remorse for a young lady going through a traumatic struggle. But Thandiwe had no qualms forcing the young girl into her new role as her son’s “bride”.

Gudwana’s stoic posture in the dock reflected the fact that up until the sentencing procedures on Wednesday, he maintained that he had done nothing wrong, that he had met the traditional standards set by the practice of ukuthwala.

But unfortunately for many girls and women in SA, the tradition’s intentional misuse has added to the milieu of sexual violence plaguing the nation.

The victim’s ordeal started when a few days after her father’s death, Bangi told her that a man called Malibongwe was looking for a wife in Cape Town. She would be leaving on December 22.

When she found her aunt packing her clothes into bags on the day before she was expected to depart for Cape Town, she pleaded with her to let her stay in her village, the only place she knew.

Her pleas rang hollow and the next morning her aunt woke her up and told her to get ready. Bangi put her into a taxi paid the driver and told him not to allow her to get off at any stop. She gave the taxi driver Gudwana’s cellphone number.

When she arrived at Philippi bus station the next morning, Gudwana and Thandiwe were waiting for her.

When they arrived at the Gudwana home, Thandiwe told her that she would share a bed with her son and it would be arranged that the two of them would get married. Gudwana was 27 years old at the time.

The victim pleaded with Gudwana and Thandiwe to let her go home, saying she did not want to get married, but Gudwana simply explained that he had sent money to her family for her father’s funeral. He had paid for her.

That night she lay in on a strange bed, fully clothed. It was not a deterrent for Gudwana, who forcefully removed her clothes and started touching her while she cried.

He then took off his clothes and raped her. When he was done he refused to let her dress and slapped her across the face.

She cried through the whole ordeal. When she was eventually allowed to dress, she put her jeans back on and slept on top of the duvet covers.

She recounted the depravity of numerous rapes and beatings she suffered at the hands of Gudwana when she testified in closed court in 2014. She was only 17 years old at the time of her testimony.

The victim attempted to contact a friend in an attempt to go home.

Afraid that the victim might try to run, Thandiwe forced her to dress in “amadaki” attire so that the matrimony could be formalised.

When she protested, Thandiwe exclaimed that she had wasted money by bringing her from the Eastern Cape to Cape Town.

The exchange of money was vital for the state to prove the human trafficking charge.

Thandiwe also said that “no makoti will go to school” when the victim pleaded to be allowed to attend school.

When she was eventually allowed to attend school, the brave victim told the staff about her ordeal. She was taken to a safe house, but the next day Gudwana went to the school looking for his “wife”. He ran away when a school employee threatened to call the police.

The school employee received a visit from a furious Thandiwe that Saturday, after her son was arrested. She swore at her, saying the complainant was her daughter-in-law and that she was married to her son.

In her heads of argument, state prosecutor Adv Maria Marshall explained that according to customary law, the practice of ukuthwala was an irregular method for commencing negotiations between families of the intended bride and groom directed at the conclusion of a customary marriage but that it was not a means of marriage in itself.

So, what exactly is ukuthwala?

According to Marshall’s heads of argument, the core elements of the traditional conception of ukuthwala included that:

“On the other hand there is the aberration of the traditional conception, which permits rape and abduction,” argued Marshall.

“Where young girls are often forced into unions with their abductors, sometimes with the complicity of their families, who are paid 'lobola' upfront. These girls are abducted, raped and beaten in an effort to bring them into submission as wives,” said Marshall.

“This practice is a severe and impermissible violation of women’s and children’s basic rights to dignity, equality, life, freedom and security of the person, and freedom from slavery,” she said.

Pillay said that though the accused maintained that they were not guilty, their evasiveness during cross-examination showed that they knew what they were doing was wrong and displayed a lack of remorse.

Gudwana was sentenced to 25 years in jail for human trafficking, 25 years for rape, three years for kidnapping, and another two for assault with intent to cause grievous bodily harm. The sentences will run concurrently, meaning Gudwana may only serve 25 years' direct imprisonment.

Bangi was sentenced to 12 years' direct imprisonment for human trafficking.

Thandiwe received a 10-year sentence for human trafficking and kidnapping.

All the accused are expected to appeal against their sentences.

High levels of violence, inequality and poverty are leaving SA children at risk of becoming victims of sexual exploitation
News
1 year ago

All wives and unions are equal before the amended law

All wives in customary or polygamous marriages, irrespective of when the marriage was concluded, are finally treated equally when it comes to ...
Opinion
1 year ago
Next Article