Taxis back on the roads today, says Santaco chairman 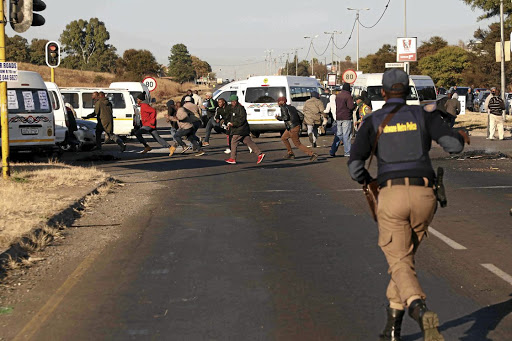 Taxi drivers flee as the Tshwane Metro Police, the SAPS and SANDF soldiers acted on the drivers who had blockaded the R55 in Laudium, Pretoria, yesterday, preventing people from going to work during a strike over government relief fund./Thuulani Mbele

Taxi bosses in Pretoria say they will abandon their protest over Covid-19 relief funds provided government allows them to load at full capacity and travel across provinces.

Yesterday's protest in Gauteng turned violent with police using rubber bullets to disperse protesting taxi operators who had blockaded roads. Soldiers were deployed to some hot spots. Taxi operators were seen in some areas stopping motorists and harassing people asking for lifts to get to work.

The taxi industry is rejecting transport minister Fikile Mbalula's R1.13bn in relief funds payment. Minibus taxi bosses are unhappy that the money will be shared with e-hailing services and metered taxis. The protest saw thousands of passengers left stranded after South African National Taxi Council (Santaco) in the province embarked on a shutdown, complaining that the R5,000 per taxi was not enough. They demanded R20,000 per taxi instead.

Yesterday, chairperson of Santaco in Gauteng, Johannes Mkhonza, would not be drawn into what would happen if things did not go their way.

He said the strike was scheduled just for a day.

"Tomorrow, things will go back to normal. We will wait for the minister of transport to give us feedback on the issues such as operating at 100% capacity and the reopening of inter-provincial travel. We can only make a decision after receiving that feedback," he said.

Mbalula's engagement with taxi owners in Soshanguve, Pretoria, ended in chaos. Taxi drivers and owners complained about their vehicles being repossessed by banks. They also asked Mbalula why rubber bullets were earlier fired on them while they were "protesting peacefully".

Cape Town commuters were able to swiftly get to work while it was a vastly different scenario in Gauteng, as day one of a taxi strike got under way ...
News
1 year ago

The only thing stranded commuters could do on Monday was hope they could find alternative transport to get to work on time and avoid the prospect of ...
News
1 year ago

In April, Mbalula announced that taxis would operate at full capacity but then changed his mind a day later, reducing capacity to 70%.

The interaction got heated and Mbalula had to be hurried into his vehicle, leaving the drivers and owners shouting "Mbalula must fall".

Mbalula said the R1.13bn relief fund is all that government can give to the sector. Mbalula has publicly come out in support of taxis operating at full capacity and the reopening of inter-provincial travel.

He, however, said there needs to be consultations with the National Command Council which will make a final decision. Taxis currently operate at 70% capacity in order to reduce the risk of Covid-19.

Some of the taxis were impounded by law enforcement officers after their drivers ran for cover, leaving them in the middle of the road. Most commuters were forced to walk long distances to get to their places of work as they said their jobs were on the line.

Government has been in long negotiations with the taxi industry for the introduction of relief funding which will help the sector on the losses they have incurred during the national lockdown.

On the eve of the strike, Mbalula said there was no room to increase the funding.

He said he agreed with taxi industry that the money was not enough but warned the government's resources were currently stretched to the limit. Mbalula visited Soshanguve yesterday, where some of the roads were blocked. He reiterated his position that the strike was counter-productive.

"It is 26 years of freedom, the taxi industry has been giving us R40bn back into the economy but they don't see the value of it. They still run an informal industry with workers not registered," Mbalula said.