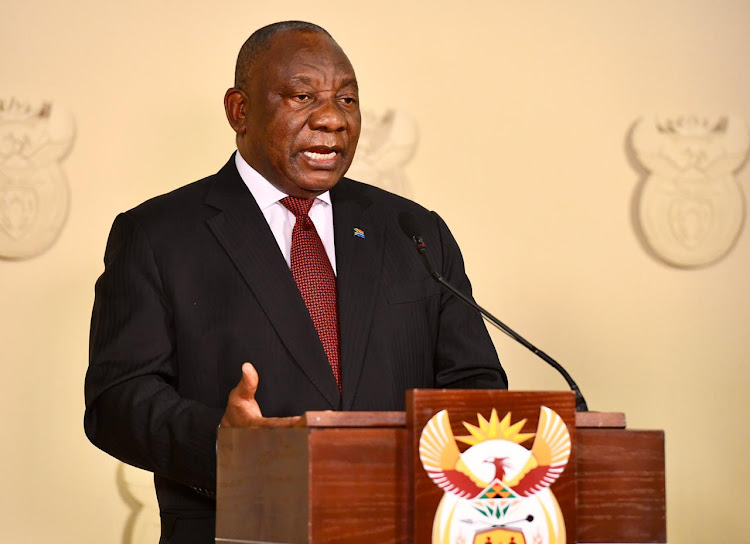 SA is not alone. All countries that implemented a form of lockdown are seeing major job losses, says President Cyril Ramaphosa.
Image: GCIS

President Cyril Ramaphosa warned on Monday of a job loss tsunami in the aftermath of the Covid-19 lockdown.

Ramaphosa, in his weekly newsletter, focused on the economic impact of the coronavirus pandemic.

It was inevitable for people’s livelihoods to be destroyed as businesses folded. He said employers, big and small, would have to retrench to mitigate the economic impact brought about by the lockdown.

The reality, said Ramaphosa, was that it would take a long time for the economy to recover to what it was before the pandemic.

Even worse, the economy was ailing before the coronavirus and unemployment was already high with youth unemployment at 55%.

It has been predicted that the country’s general unemployment rate, which stood at 30% pre-coronavirus, may climb to 50% by next year.

This while youth unemployment is expected to rocket to at least 70% post Covid-19.

Ramaphosa said the jobs bloodbath was affecting every country that opted for a lockdown to contain the virus.

“As a country, we have all been keenly aware of the consequences of shutting down economic activity during the lockdown that was absolutely critical to save the lives of our people,” wrote Ramaphosa.

“South Africa is not alone. In Italy, the UK, the US, Germany, India, China and nearly every country that had imposed some form of lockdown, jobs have been lost or hours of workers reduced. It is being spoken of as a job loss tsunami.

“In April the International Labour Organisation forecast there would be about 305-million job losses worldwide. The situation of workers in the informal economy is even worse, with an estimated 1.6-billion workers in danger of losing their livelihoods,” he added.

“For a country such as ours, which was already facing an unemployment crisis and weak economic growth, difficult decisions and difficult days lie ahead.

“We would urge that the difficult decisions are taken with care and with due regard to balancing the sustainability of companies and the livelihoods of workers. It is important that whatever is done is underpinned by ensuring a just transition to all concerned.”

The president said the economic relief measures the government had introduced to shield businesses from ruin would never be enough.

On Monday the taxi industry in Gauteng embarked on a shutdown strike to protest against inadequate economic relief offered to the industry by the government.

The industry has predicted that no less than 40% of taxi drivers will lose their jobs should they not get the relief they are demanding.

Ramaphosa refers contentious bills back to parliament for reconsideration

President Cyril Ramaphosa has declined signing into law two bills that seek to regulate the entertainment industry and provide for the protection of ...
News
1 year ago

Just hours after President Cyril Ramaphosa addressed the nation and waged war on femicide and gender-based violence, actress Rami Chuene has urged ...
Pic of The Day
1 year ago
Next Article