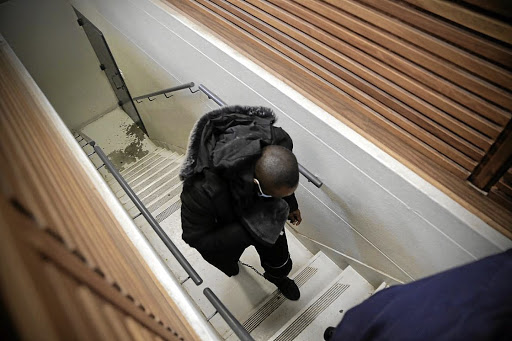 Muzikayise Malephane made his first appearance at the Roodepoort magistrate's court on charges relating to the murder of Tshegofatso Pule. Malephane was allegedly promised R70,000 for the murder.
Image: Sebabatso Mosamo

The man accused of killing Tshegofatso Pule has had run-ins with the law, including being charged for attempted murder and possession of a suspected stolen vehicle.

Yet all of the cases but one that Muzikayise Malephane, 31, previously faced were later withdrawn. These revelations are contained in a police profiling report seen by Sowetan.

However, according to Malephane's mother and some of his neighbours in Zondi, Soweto, he is a "peaceful man who is not capable" of the gruesome murder he is accused.

Malephane's mother said her son would not have any reason to kill anyone for money as she took care of him.

She said she knew very little about her son's dealings as he left the home three years ago.

"I am really shocked about what has happened. My son has three children with different mothers. I take care of them... Why would he kill a woman? He does not need any money," she said.

"I am praying every day for God to help me cope with what I am currently facing."

She said she learnt that something had happened to her son when the police called her a few days ago to come and fetch her car after he was arrested.

Malephane was returning from Mpumalanga on Monday when he was nabbed by the police in connection with Pule's murder.

He appeared in the Roodepoort magistrate's court on Wednesday, facing charges of premeditated murder. He abandoned a bail application.

In April last year, he was caught doing 161km/h in a 120km/h zone. He pleaded guilty to the charges and paid an admission of guilt fine of R1,000.

In July, police again detained him for being in possession of a "presumably" stolen vehicle. The case was, however, withdrawn according to police records.

In November 2012, Malephane was arrested for attempted murder, which involved a firearm, but this case too was also withdrawn.

In the same year, he was also arrested for attempted burglary but his case was later withdrawn.

In 2007, he was arrested for pointing "something that is likely to lead a person to believe if (sic) a firearm". That case was withdrawn.

In his neighbourhood where he grew up nicknamed "Cheese Boy", Malephane's friends and neighbours insisted he could not harm anyone.

"He likes people and he is the kind of guy that did not hold grudges," said one of the neighbours who refused to give her name.

"I hung around him a lot. He was a party animal. I am actually shocked that he could be linked to such a gruesome crime. Even now I can't believe what I saw on television yesterday. He was the kind of guy who just changed cars now and then," she said.

Another neighbour said Malephane was not "desperate for cash to kill someone for money".

"He could have asked for the money from his mom and she could have given him the R70,000 and even more if he wanted more.

"It is baffling that a guy like him could be promised money and then commit such a crime," the neighbour said.

Some of Malephane's friends yesterday sat on the boot of an open VW Caravan, perplexed by the events of the previous day where their buddy was on national television for killing Pule.

"I watched the news the whole day. I've never done that before. I'm shocked.

"It is so bad that my weed can't make me high. Cheese [Boy] is not the kind of guy who could do something like that...," a man said.

According to a statement taken by the police from Malephane, he allegedly confessed to killing Pule, saying the murder was planned together with a man that Pule knew.

He was allegedly promised R70,000 for the murder.

Pule's body was found stabbed and hanging from a tree in a veld in Roodepoort two weeks ago.

She was eight months pregnant when she was murdered.

Pule was last seen on Thursday, June 4, after leaving her home in Soweto to visit her boyfriend. Although her body was found the next day, her family only positively identified her on Monday June 8.

She was laid to rest on Thursday last week.

The man accused of killing Tshegofatso Pule appeared in the Roodepoort magistrate’s court on Wednesday afternoon but refused to apply for bail.
News
1 year ago
Next Article