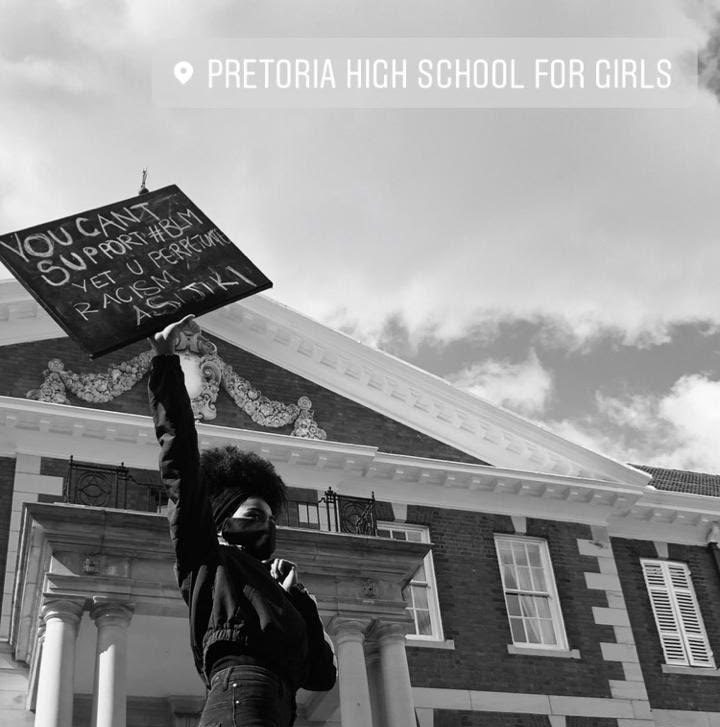 A pupil at Pretoria High School for Girls poses for a picture during the protest.
Image: Supplied

Four years after the famous Pretoria High School for Girls protest over the school's policing of their hair, pupils staged a protest at the school against racism on Thursday.

In August 2016, pupils at the school protested against an instruction given to black students to straighten their hair.

After listening to the pupils’ complaints that year‚ Gauteng education MEC Panyaza Lesufi resolved that the section of the school’s code of conduct pertaining to hair would be reviewed.

However, the pupils on Thursday say nothing has changed.

Amukelani Mbokane, a matriculant who is taking part in the protest, said their complaints stem from an incident which occurred last week.

“There were videos of racial slurs in the school posted last week. They were ultimately taken down but we are not satisfied with how the school is evasive and doesn’t address us on it. The school is not committed to change.

“We are protesting for Black Lives Matter, against sexism, homophobia and racism at the school. They keep lying to us and we are tired. We started protesting around 10am this morning and the school is threatening to bring cops and remove us,” Mbokane said.

“About 200 learners were in the classroom busy with their catch-up programme and unfortunately, about 17 learners decided to protest about issues raised in 2016.

“According to information at our disposal, those concerns were attended to. We would like to appeal to parents to assist us to instill discipline in their children and remind those learners about the curriculum time lost and dangers of violating lockdown regulations. Indeed, Covid-19 is real and we are all encouraged to adhere to protocols for our safety,” Mabona said.

Mbokane said nothing the school did would silence them, unless it transformed.

Another pupil, Chante Pietersen, said the school shielded people who were discriminatory.

“They call us the K-, N-, and H- words. Especially the teachers, they perpetuate racism a lot and nothing gets done about it. We were expecting to hear what the decision will be on disciplinary and nothing was said. If people have posted videos being racist, surely something must be done,” Pietersen said.

She said the school called a meeting this week where it attempted to silence the pupils.

“We were speaking about Black Lives Matter and some people would say ‘All Lives Matter’. We need to end racism at girls' high. We are not allowed to speak about racism, even in class,” she said.

Pietersen and the other protesters hope to dismantle the alleged racism at the school.

The following are their demands:

Mabona added that parents, through school governing bodies (SGBs), are empowered to craft and amend a code of conduct of their children at school. He said the SGB at the school must lead the process to amend the code of conduct accordingly.

“We must also indicate that the timing is really bad. Our focal point should be recovery on our curriculum time lost. Learners must bear in mind that in no time they will be expected to write their trial examinations,” Mabona said.

Last week, we reported on a white teacher at Pinnacle College in Kyalami, north of Johannesburg, Sonya de Vynck who had threatened to kneel on the ...
Opinion
1 year ago
Next Article