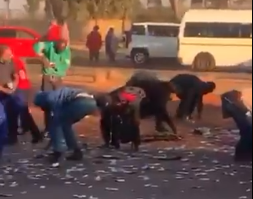 FILE IMAGE: Kagiso residents rushed to the scene of a cash-in-transit heist to collect notes left behind at the scene.
Image: Screengrab

Police have warned against a tendency by members of the public to pick up money scattered at cash-in-transit (CIT) crime scenes.

“We are appealing to community members to refrain from such criminality.

“We have noted such acts of criminality playing out at the latest CIT heist that took place in Dobsonville on Monday morning and another CIT that took place two weeks ago in Kagiso. In both incidents, dozens of community members accessed the crime scenes and looted scattered money that was found to be lying on the ground, with some still in the cash van,” Mathe said.

A cash-in-transit heist was carried out in the early hours of Wednesday morning in Kagiso on the West Rand, the police confirmed.
News
2 years ago

CIT heist scenes can often be dangerous particularly when explosives are used in such robberies.

“It is for this reason that we warn members of the community that in some instances, it is possible that not all explosives were detonated at the time when the robbery was committed. This therefore poses a risk for the detonator to explode in their presence, thereby posing a risk for the loss of life.

“When a robbery is committed, the area now becomes a crime scene and those looting at such crime scenes often contaminate the scene which will constitute a crime of theft as well as defeating the ends of justice. We therefore call on all our communities to refrain from entering crime scenes but rather to support the work of the police by assisting members when a crime is committed as opposed to being part of the crime itself,” Mathe added.

Community members who collected banknotes at the scene of a cash-in-transit heist in Kagiso on the West Rand committed a crime, police said on ...
News
2 years ago
Next Article