Uitenhage stylist uses his hair to protest against Covid-19 lockdown 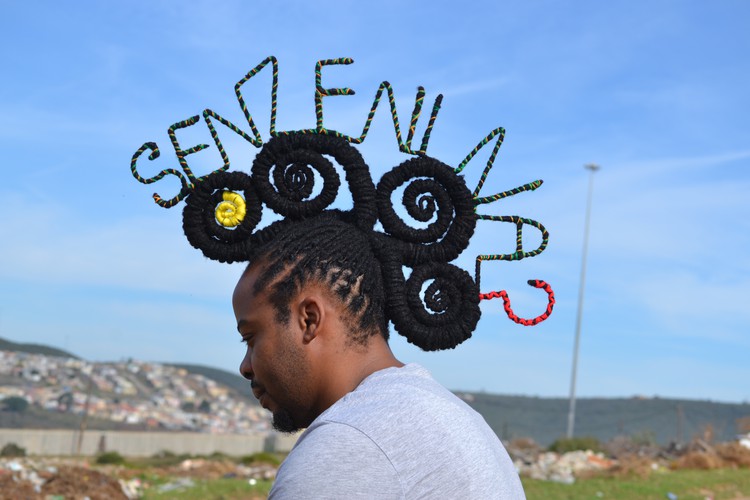 Onele Cembi uses his hair to register his protest against lockdown conditions which prevent him from operating his salon.
Image: GroundUp/Thamsanqa Mbovane

KwaNobuhle hairdresser Onele Cembi has found a way to register a protest against lockdown conditions: writing his protest in his hair.

Cembi, who first “wrote” the words “Covid-19” in his dreadlocks, has now changed his hairstyle to reflect his frustration with the lockdown which is affecting his business. He has written “Senzenina” (what have we done?), in his hair, using the word of the old anti-apartheid song and prompting many Uitenhage passers-by to stop and stare.

Cembi, a father of six children, runs Odds and Odz Dreads Salon in the Eastern Cape township. He says he has lost about R30,000 a month during the lockdown.

“I closed down my salon. I can neither support my family nor pay all my bills any more.”

He says he has contacted the Covid-19 small business relief fund, but the criteria are very difficult to meet.

Businesses hit so hard by lockdown that some may not survive.
Good Life
1 year ago

“I did download the application forms, but to qualify for funds you need to have annual financial statements, six months' cash flow projections, a management account, plus you must be registered with UIF [Unemployment Insurance Fund] and submit other documents,” says Cembi.

“My question is: where will a township salon have such documents to produce and give to the government?”

He estimates that out of more than 300 salons in his township, not a single one could qualify for the relief fund because the criteria used are aimed at bigger, formal businesses.

“We have a WhatsApp group and none of us have received any government funding during lockdown.”

He says the “writing” in his hair is his own protest. “The government under level 3 has allowed churches, taverns [and] schools to be open, yet we are barred from operating, and I ask: senzenina?”

Nkwame, another hairdresser, from Ghana, who did not want to give his full name, said he had lost about R5,000 every month since lockdown.

“I had five employees, and all are now jobless, without any income.”

Hair and beauty technicians have started an online petition pleading with the government to allow them to operate during lockdown. The petition, started by the Employers Organisation for Hairdressing, Cosmetology and Beauty (EOHCB), was posted on April 25.

The association’s national manager Cobus Grobler said many people had applied for the relief funding but did not qualify.

“The assistance is mostly focused on employees and not on the owners,” he said.

The association had been involved in talks with the government and “major progress” had been made, he said.