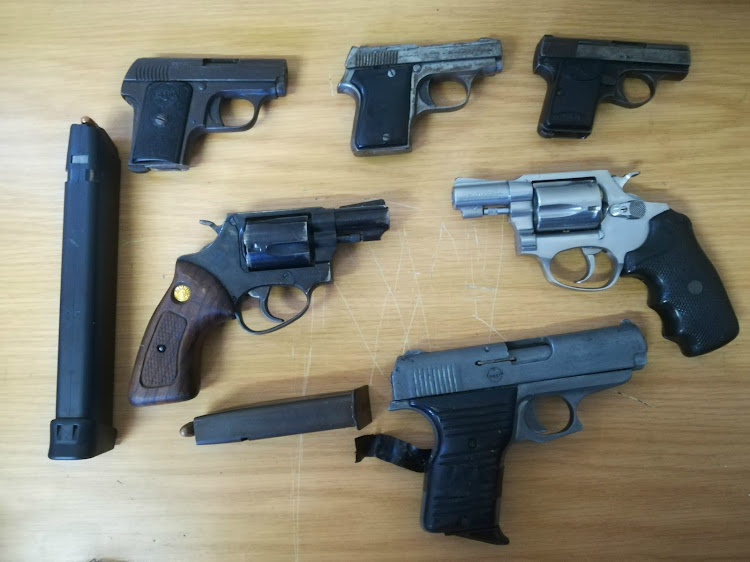 Col Sibongile Soci said in a statement the firearm amnesty period provided an opportunity for members of the public to surrender unwanted firearms and ammunition, firearms possessed unlawfully, as well as firearm parts, to police without fear of being prosecuted for the unlawful possession of a firearm or ammunition.

In addition to the illegal firearms seized, he said “the momentum continued with the recovery of 329 rounds of ammunition and 45 firearms from June 1—15”.

A Mpumalanga man is under arrest after firing a fatal shot at his own mother when she tried to intervene during a heated argument he was engaged in.
News
1 year ago

In the latest busts, he said a 39-year-old male was found in possession of a 9mm pistol and a 9mm magazine with one live round of ammunition at Qota locality, Ngcobo, on June 12. Further investigation revealed that the firearm was reported stolen in Rondebosch.

A second suspect, a 29-year-old female, was found in possession of an unlicensed 9mm pistol with one magazine loaded with five live rounds. The firearm was not reported stolen.

The suspects were charged for possession of illegal firearms and ammunition and both appeared at the Ngcobo magistrate’s court on Monday.

Eastern Cape provincial police commissioner Lt-Gen Liziwe Ntshinga said: “The proliferation of firearms remains an operational priority of SAPS. It is a fact that firearms are at the centre of all instances involving serious violent crime. By encouraging the safekeeping of firearms in our communities, collectively we can prevent legal firearms from becoming illegal.”

Soci said all the recovered/confiscated firearms have been sent for ballistic testing to ascertain whether they have been used in the commission of crime.

Almost 1,500 firearms and thousands of rounds of ammunition have been handed over to police since the start of an amnesty for illegal and unwanted ...
News
1 year ago

SA gun amnesty welcomed 'but surrendered weapons must be safeguarded'

SA's experience of firearm amnesties confirmed they were effective in recovering guns, including unwanted, unauthorised and illegal weapons, Gun Free ...
News
2 years ago