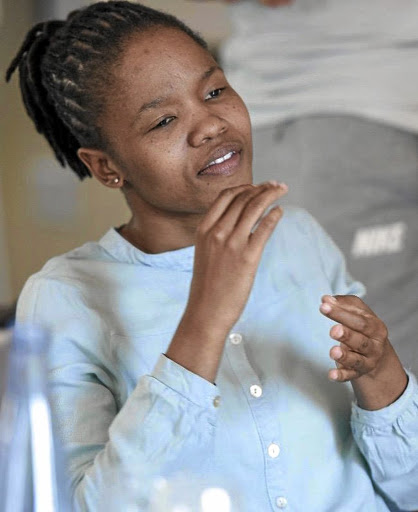 Thuli Zikalala during one of her interpreting sessions./SUPPLIED

Thuli Zikalala is a young trailblazer who is planning to transform the interpreting profession.

The 30-year-old is one of only 11 interpreters in the South African Sign Language (SASL) to English field who are accredited with the SA Translation Institute (SATI).

She is also the first interpreter in the country to translate a podcast into SASL.

"An interpreter is someone who facilitates conversation between two people who do not speak the same language," she explained.

One of the highlights of her career is interpreting the State of the Nation Address in February. She has also interpreted for the Afro Punk Solution Sessions which is a platform that brings people together to talk about issues facing communities. She was the first person in SA to interpret at the festival.

Zikalala from Phefeni, Soweto, was raised by her father and was only interested in SASL and later interpreting when she got to Wits University.

"I was a psychology major but I saw SASL and thought it was interesting," said Zikalala.

She became good at understanding the language rapidly and realised that interpreting for the deaf and English-speaking community could be a possible career for her. Zikalala said the normal career choice for interpreters who study SASL is to teach in deaf schools but she did not want to limit her choices.

She said interpreting is a skill which requires her to tailor her services to what is needed. "You have to adjust language depending on your setting to make sure people understand you," she said.

Earlier in the year, she left her job to focus on her being an independent service provider which includes interpreting podcasts.

"I love podcasts and I was not even conscious that they don't cater to deaf people. I realised there is a disconnect there because it's a relatively new platform in this country," she said.

"When I left my job, I immediately hit the ceiling. I spoke to the Cliff Central station manager and I offered my services. I told them they have an entire community who is excluded from their content."

It has been a tough few years for Simphiwe Xaba as the Soweto youth battles to fulfil her childhood dream of becoming a teacher.
News
1 year ago

The spirit of resilience is what comes to mind when you see images of Thato Mokasi and Perm Stomberg selling scones at Soshanguve Crossing in their ...
News
1 year ago

Meet Andiswa Gebashe - the woman who delivers good or bad news right next to President Cyril Ramaphosa.
News
2 years ago
Next Article