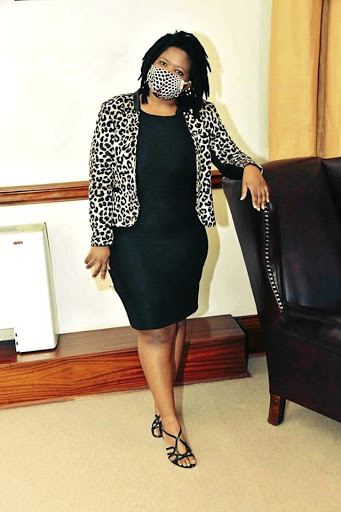 It's just after 6pm when Nonceba Mhlauli joins me on meetings platform, Zoom.

She is wearing a beanie and a jersey and taking a gulp from a jug filled with water and a slice of lemon. "I just came back from jogging, took longer than I expected," she says in her clear mellow voice that scored her the title "Voice of God".

Mhlauli is the spokesperson in the ministry in the presidency and was given the title by the public during the government's virtual press conferences.

"The funniest thing is that I've had so many people saying 'oh my god you've got such a sweet voice and your voice is so sexy'," Mhlauli said.

"I don't think it's sexy, well I don't know, I think that it's a representation of who I am. Maybe I should think about radio actually. I think I should do a podcast."

She said she would focus on intellectual conversations that have lost meaning in the age of digital mediums like Twitter.

The 30-year-old journalism and politics PhD scholar was the brains behind government's holding virtual press briefings during the ongoing Covid-19 pandemic.

"It's a very daunting task because people think that it's just reading WhatsApp messages because half the time I'm editing the questions as I'm reading them and then sometimes they are not written properly then I must make sense of it and you know it's live on TV and my boss is making fun of me."

The government had to think about how to accurately communicate to millions of South Africans as Covid-19 infections increased.

Some of the old ways of doing things had to be immediately changed.

"I remember the first time when I said we should have a virtual briefing, he [minister in the presidency Jackson Mthembu] was like 'what are you talking about?'

"I was like 'journalists don't have to be physically there' and that's when he was cool to find a way to figure it out," Mhlauli said.

"So, I do think the innovation does come with the fact that it is new fresh blood with fresh minds and I think it also helps that some of us are new to the government system and some of the things are like 'no actually we don't have to do things the way they have always been done'. We can find improved ways to do them."

Mhlauli is one of the young people helping communicate the government's message and dispelling fake news that has, in many cases, led to widespread confusion and panic.

Mhlauli previously worked in parliament as the ANC caucus spokesperson. She now works at the Union Buildings as Mthembu's spokesperson and serves on the council of TVET colleges.