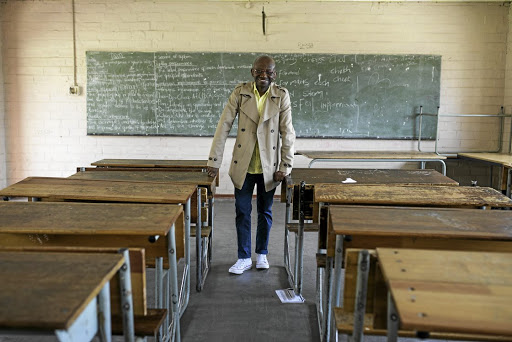 Seth Mazibuko, a student leader from the class of 1976, in a classroom at his old high school, Phefeni Secondary School, on Vilakazi Street in Soweto.
Image: IHSAAN HAFFEJEE

Former June 16 student leader Seth Mazibuko wakes up every morning in the same house that he grew up and lived in at Orlando East for the past 60 years.

He tells me that the three-roomed red brick house built in the 1930s does not make him restlessly toss in his sleep. He is not a haunted man.

This is strange because he selflessly gave passionate commitment to the Struggle to improve the living conditions of people in the townships.

Above all, he focused his time and energy since 1976 to the Struggle for quality schools and education for black children which, he believes, has been betrayed.

He admits that this centuries-old struggle has not borne the results he and his comrades fought for.

The suggestion of deferred dreams and betrayal should be enough to keep him awake at night. But he insists that he sleeps.

"When I look at what has happened in the last four decades, especially June 16, it hurts my soul. We must admit that all that happened was to remove the word Bantu from education. Otherwise the curriculum and the system remains the same. The children of today have no sense of what we set out to achieve."

When he dreams, it is about the unfinished business of the Struggle and the right of the township child to access opportunities for quality education in state-of-the-art circumstances.

Mazibuko believes the Struggle has not ended and never will until all black children can progress through quality education to prepare them to "graze in greener pastures".

He is disappointed that most 1976 student leaders have allegedly abdicated their leadership role and the trenches of working in their community.

"Frankly, my peers and contemporaries only show up on the national [youth] day. Otherwise they are not there."

For 60 years, Mazibuko has tied his life to the Struggle. To him, that is the purpose of his life. It is only the dawn of economic justice, the access to land and improvement of the education of the black child that will give him peace.

"For me, the Struggle will end when our people can produce their own food from their land; see no one subjected to evictions; children enjoy quality education and there is no self-destructive violence.

"The Struggle will end when people love each other and can protect themselves."

It is the Black Consciousness spirit of self-reliance and self-determination that has been Mazibuko's ideological foundation. He was influenced by this philosophy during his teenage years in the 1970s.

It is said that if you believe in the same things at 60 that you believed at 20, then you have lost 40 years of your life. People change with the times and times change people.

But not for Mazibuko. The burning commitment of self-sacrifice to serve the people without expecting anything in return is what drives him. "For me, the Struggle was not about what I could get for myself. It was and will always be about giving community service. I believe our people, marginalised and poor, need us. But as I say, they have been abandoned."

The Struggle will end when people love each other and can protect themselves.

He is so deeply rooted in this culture of selfless service that he wakes up early on some days to serve soup to the elderly in Orlando East. He is a member of the Orlando Task Team, a grouping that promotes the interests of the poor.

He depends on voluntary donations for this as he has neither government nor corporate support for his initiative.

But I ask him why, considering his Struggle credentials, he is marginalised and poor like the people in his community.

This was the deputy president to Tsietsi Mashinini, student leader of the 1976 protests. In addition, he was accused Number 3 in the trial of the Soweto 11 leaders who allegedly were the masterminds behind the student upheavals.

Mazibuko is infamous, depending on how you look at things, for being forthright and outspoken. He does not mince his words.

Worse, he believes that leaders must put the interests of the people before their own.

"I am not very popular in political circles. In fact, there is a perception that I talk too much because I speak my mind. What I have to say leaves many uncomfortable.

"The consequence is that you are left outside. You see, I am not about T-shirt politics but the liberation of my people."

According to Mazibuko, to be a leader who does not "want to eat" in today's society is heresy.

It has been a tough few years for Simphiwe Xaba as the Soweto youth battles to fulfil her childhood dream of becoming a teacher.
News
1 year ago

He says there was a time when he was a member the Orlando branch of the ANC.

"I got frustrated with how the organisation functions. I quit to do what I believe is right," said Mazibuko. He does not believe that passionate devotion to an organisation should exclude self-criticism.

When he was released from Robben Island two years before Nelson Mandela in 1987, it was taken for granted that as a former prominent student leader and political prisoner, he too would graze in greener pastures. Too often, he has been condemned to function outside the system. This has seen him pay the price for nonconformity.

"I own neither a house nor a bicycle. In fact, I am unemployed and don't even get the much vaunted R350 for people in my situation. For me, this Struggle and its freedom has done absolutely nothing for me. But it has never been about personal glory or gain.

"I will not deny that I am angry and bitter. It is not about my purse. Instead, I am angry because we have failed to improve the quality of life for the people, especially the children that are the future of this country. Looking at the last 25 years, the Struggle has been abandoned," said Mazibuko.

'Use parastatals to kickstart drive to create employment'

Youth grant mooted as part of solution
News
1 year ago

Possessed of what is perceived to be uncompromising radicalism, Mazibuko finds himself adrift in an uncertain future on the margins. He has refused to be carried by the currency that leads to position and power in government.

"Many comrades have grown tired and silenced by positions of comfort. Community activism is no longer their thing. As for me, the Struggle of 1976 is incomplete. Thus the purpose of my life now is to defend the values, virtues and victories of our Struggle.

"I will die happy knowing that I have played my role."

Over the past 25 years the hope, faith and self-declared love for equality and justice has been in danger of foundering. It would seem that Mazibuko is the last man standing.

He remains full of hope.

-Memela is a writer, cultural critic and public servant