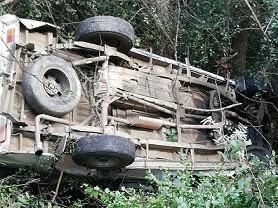 The vehicle overturned after the driver jumped out.
Image: SAPS

The driver of a vehicle transporting dagga had to be hospitalised after he jumped out of the moving vehicle during a police chase.

His passenger sustained only minor injuries.

Dagga worth at least R500,000 was retrieved from the vehicle, which had been travelling from the Eastern Cape through the Garden Route. 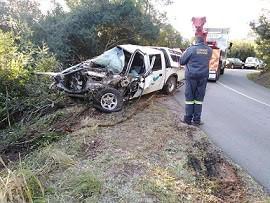 The motorist jumped out of the moving vehicle, which overturned after landing in a gorge. Dagga valued at half-a-million rand was found inside the bakkie.
Image: SAPS

“A vehicle matching the description was spotted in Wilderness and police vehicles gave chase.

“The suspected vehicle was successfully intercepted before the driver jumped out from the moving vehicle, which caused it to leave the road and plunge down into a gorge with a passenger inside.”

The 28-year-old suspect was taken to hospital for medical treatment.

He is expected to appear in the George magistrate's court on Monday.

Nkwalase said he will face charges of dealing in cannabis as well as reckless and negligent driving.

A 48-year-old man who was behind the wheel of a truck that was involved in a horrific crash in Jozini in northern KwaZulu-Natal, which claimed eight ...
News
1 year ago
Next Article