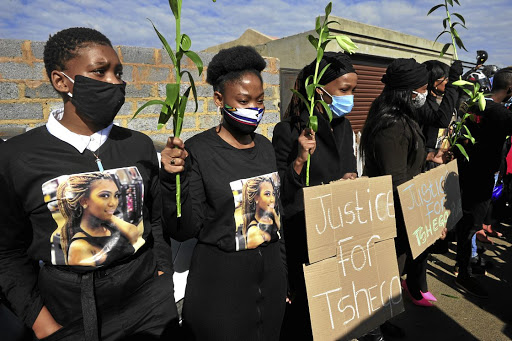 With femicide rates on the rise again this week, Tshegofatso Pule has become another poster of public rage over gender-based violence (GBV).

Pule, 28, was murdered while eight months pregnant and her body was found hanging from a tree in a veld in Durban Deep in Roodepoort on Monday.

Yesterday, family members sobbed uncontrollably as Pule's casket was lowered into the ground at the Dobsonville Cemetery. Her killer is still at large. She was yet another statistic this week, together with Naledi Phangindawo, 26, who was attacked while attending a cultural function at the weekend in KwaNonqaba, Mossel Bay.

Phangindawo succumbed to her injuries on arrival at hospital, according to her sister, Yashika Phangindawo. A 34-year-old man has since handed himself over to the police.

Pule and Phangindawo's murders have fuelled a tide of renewed protest, mostly directed at government.

Such public fury and outcry was last seen after the deaths of the likes of Uyinene Mrwetyana, a 19-year-old University of Cape Town student killed last year, Karabo Mokoena, 22 in 2018 and 29-year-old Eskom employee Thembisile Yende, who was killed in 2017. But the list of victims of GBV just keeps growing by the day.

"Last Saturday, I buried my cousin who was killed by a man who was meant to protect her. She was shot with four bullets by her husband after they got married in February.

"On Monday morning at 3.30am, I got a call that my niece is no more. I've represented many criminals, including the likes of Karabo Mokoena's killer. I've taken a pledge that if you've raped, killed your girlfriend or molested a child... V*tsek!" he said.

He urged community members to be patient with the police and the wheels of justice as he believed that those who are behind her murder will be arrested.

Pule's sister Mimi recalled a candid memory of her sister, whom she described as her everything. They lost their parents at a young age.

Her parents, Lungi and Makina Mashiane, both died when she was much younger.

Her aunt, Priscilla Giwu, took Pule in when her mother died 11 years ago. "Early this year I was diagnosed with depression. When Tshego came, she [jokingly] asked me if I am crazy or if I was told that I am crazy. I asked her, 'what do you mean? and she said, 'learn to forget'. Yes, mom and dad left us but you need to learn to forget, let go."

She recalled how Pule assured her that she would never leave her. "She said, 'I will always be there for you. I am going to Grace Bible Church and I will pray for you, you are going to find peace in your heart'," Mimi said of her sister's words to her.

Tshepiso Tsita, a childhood friend of Pule, said while she was heartbroken, she wanted to urge mourners not only to remember the manner in which she died but how she lived.

"Tshego would really be proud that everyone has been there for each other [since her death] and are pulling together, united in support.

"It goes to show that we all carry a little bit of Tshego inside ourselves. If we are looking for something positive to come out of something this painful, it is that new friendships which will be formed and Tshego would love that."

"Nothing was more important than those close to her. So, let's keep close to each other and do what she would have wanted us to do. She would want us to be happy, laughter always got her through all the hard times, and laughter will get us through ours."

Emotions ran high at the Dobsonville cemetery on Thursday as family members and mourners bid farewell to Tshegofatso Pule, 28, who was murdered while ...
News
1 year ago

‘I am innocent,’ says man accused on Twitter of Tshegofatso Pule’s murder

David Shoba is on mission to clear his name after being accused on social media of being behind the brutal murder of Tshegofatso Pule.
News
1 year ago

The heartbroken family of Tshegofatso Pule say they want to dedicate the day of her funeral not only to bid farewell to her but to call for an end to ...
News
1 year ago
Next Article