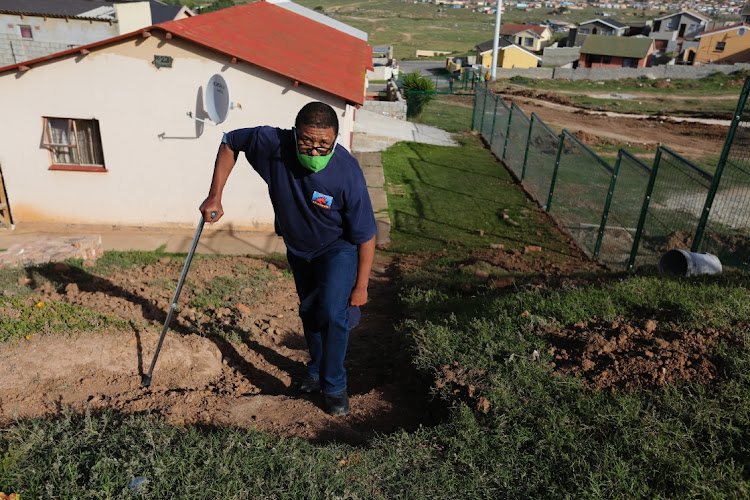 Sylvester Ntanga, 59, in the yard of his KwaDwesi home. A fence has been erected in front of the driveway at the entrance to the house.
Image: WERNER HILLS

A KwaDwesi family has literally been fenced in and forced to leave their car at a neighbour’s house, after the municipality opted to erect fencing mere metres from their front door.

Homeowners Sylvester Ntanga, 59, and Boniwe Ntanga, 56, said they had been living at the house for more than 25 years and are frustrated with the poor planning and implementation of the project, which has rendered their driveway useless.

The father of three was involved in a car accident in 1996 and his leg was subsequently replaced with an artificial limb.

His wife, Boniwe, said she fell while coming back from work and has been unable to walk properly ever since.

The couple referred to themselves as “old and disabled” and now felt trapped in their own home.

“We were told about the park renovations a while ago and supported the initiative, but no-one ever came to us and alerted us about the fencing.

“Our gate and garage was facing the side of the park since we are unable to use the side facing the street [since our accidents] with a high step and drains,” Ntanga said.

He said they had been to every relevant municipal office they could think of to have the issue resolved, but to no avail.

He said it would cost them hundreds or thousands of rand to revamp and level the front side of their house and was almost impossible as there were two municipal drains situated on the pavement.

“This needs a lot of money which I don’t have, maybe by God’s mercy if  I could win the Lotto jackpot I may try to make a driveway operational,” he said.

Sylvester said if the municipality was unable to redo the fence, an easy  solution would be to install a gate along the fence.

“With the old park, there was space in-between, even though there was still noise; it’s going to be worse now that it is closer to the yard,” he said.

“We are old and disabled, we cannot receive a government house elsewhere, we are law-abiding citizens and always pay our rates on time.

“We are now pleading with the municipality to have mercy and open space for us,” he said.

“We will only be in a position to give detail of what we can do once they have given the report,” Mniki said.

Gauteng municipalities lose up to R4bn

Gauteng municipalities have lost R4bn in revenue due to the Covid-19 pandemic.
News
1 year ago

Two weeks ago a Limpopo local newspaper, The Mirror, published a disturbing article detailing a case of corruption amounting to R900,000 at the ...
Opinion
1 year ago
Next Article