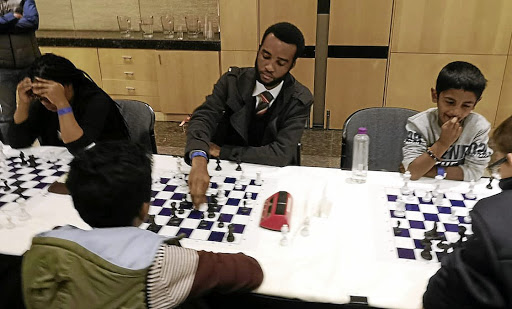 A university student has embarked on a campaign to host online chess tournaments to raise funds to buy sanitary towels for over 500 needy households.

Daniel Asiwe, 25, an industrial psychology and labour relations student at the North West University (NWU), told Sowetan that he has been involved in numerous community projects to date.

He intends to host the first online chess tournament on June 20. He said the idea was sparked by a plea he received from two young women - one of whom wanted help with getting sanitary towels.

"It was a humble request from two young ladies who had gotten my contact details from their friends and was told that I would be able to assist them," said Asiwe. "The one needed assistance with sanitary pads for herself and the other needed help with electricity for their household."

Asiwe said upon assisting the two it came to his attention that several entities are focusing on the distribution of food parcels to the needy during lockdown but no one was looking at other needs.

"So I took it upon myself to try to create some sort of fundraiser that would make it convenient to raise money to reach out and supply washable pads to over 500 needy households. I thought of hosting an online chess tournament as the number of online players has increased due to having more time on their hands," he said.

Asiwe's target is to raise at least R150,000 to buy sanitary towels and supply them to a minimum of 500 needy households.

"Corporates and other individuals who would like to jump onto this by donating any amount of money will be welcome.

"I will be starting off with the disadvantaged schools and learners that I usually have projects with," he said.

Asiwe has hosted numerous chess tournaments before, including chess school league tournaments. However, this will be the first online tournament that he will host and charge a fee for in his quest to raise the funds needed.

"We will be hosting it every month until our target has been reached; should we reach our target or a minimum of 500 players per tournament, we would be able to fundraise R15,000 monthly to the cause, and if this becomes successful, we can consider it to be a permanent solution due to the inconveniences of Covid-19.

"At the moment we will be getting R40 per player, which is why I am also pleading with big corporates to join in and partner with me on this initiative."

Asiwe's chess journey started in 2010 at Potchefstroom Boys High School in Potchefstroom, North West, when he was approached by the school's chess captain who had a few players for his junior team and asked if he would like to learn chess.

Asiwe later made the cut for the provincial under-16 team. His achievements didn't stop there as he went on to become a top provincial player for four consecutive years.