SACP proposes income support grant for job seekers, traders and a set R350 for the unemployed 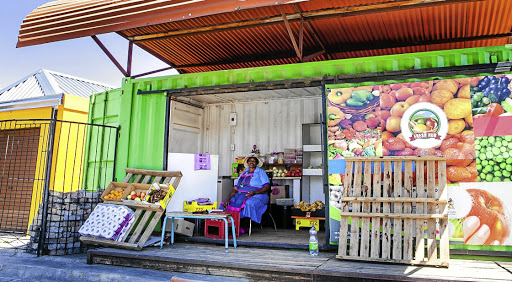 An informal trader sits at her stall in Soweto. Informal trading has always been part of South Africa's economy. The SACP is now proposing that a permanent grant should be established for these people./ Gallo Images / Sharon Seretlo

Pressure is mounting on the government to pay unemployed people R350 per month permanently, with the ANC's alliance partner, the SACP, the latest to make the call in its economic recovery document to be presented today.

The proposals are contained in a document put together by the party which will contribute to a bigger discussion paper that the tripartite alliance is working on and will likely influence government policy on how to rebuild the economy post Covid-19.

The government announced that R350 would be paid to qualifying  8-million unemployed citizens for six months as part of the relief efforts.

The proposals made in the SACP document will be made public for the first time today during a virtual webinaar. Last week, both alliance partners - Cosatu and the SACP - called for the extension of the R350 grant beyond the initial six months.

Former trade & industry minister Rob Davis, who worked on the document, will present how the SACP wants the government to rethink and restructure the economy after the coronavirus pandemic.

The party said that some of the lessons learnt during the Covid-19 outbreak can be used to deal with poverty in the country as well as supporting the working class. It proposed that the unemployment grant be extended, and the establishment of an income support grant for job seekers and those in the informal economies.

The SACP is predicting that unemployment is likely to double in SA. It said the measures it is putting forward would help unburden the economy in the long run as those receiving income support would not depend on the state forever.

For job seekers, the party said, the income support grant could be used for transport fare or data for those looking for jobs and assist those in informal economies to start, formalise and maintain their businesses.

"Given the high levels of unemployment persistent in South Africa, and the projected increase in unemployment as a result of the deepening interrelated economic and Covid-19 crises, the progressive implementation of the universal right to work should be complemented by a minimum income security guarantee," the party said.

"This should include expanded public works and the expansion of the community works, community health workers and community development workers' programmes, all incorporating decent work objectives in their design.

"The minimum income guarantee programme should also incorporate support for the growth of social economy, cooperatives and formalising the informal economy, as well as, as stated, a consideration for the adoption of a minimum income support grant."

The SACP also wants the government to use financial institutions like the SA Reserve Bank to support informal economies and community-based volunteerism which has thrived during the pandemic. They argued that this volunteerism has filled a lot of gaps in instances where the government had not succeeded and should therefore be supported.

A post-Covid-19 economy cannot, according to the paper, be the same as the one before the pandemic hit the country.

The SACP has painted a grim picture of a post-Covid SA, which is expected to heavily impact on low-skilled workers. It predicts that Covid-19 and the lockdown - which enters its 77th day - will see a change of behaviour for many South Africans who are expected to continue having virtual conferences, working from home, travelling less, among others, resulting in less business for venues and caterers.

This change in behaviour, according to the SACP, will most likely see people shop digitally on e-commerce, seeing less and less people walk into retail shops, which could ultimately be forced to shut down leading to permanent loss of many jobs.

"In South Africa, it is extremely likely that these kinds of scarring will impact most heavily on lower-skilled service jobs. Many of the jobs likely to be permanently lost will be in such sectors, and there will likely also be a change in the character of lower-skilled work in service industries as well," the party said in the document.

The SACP said this grim picture calls for a restructured economy through the sustainable recovery and development programme. This programme will see government moving more towards a policy that puts creation of sustainable
employment at its core, which would result in an economy that would improve the lives of South Africans.

"Not implementing such a programme will mean a prolonged period of economic stagnation, growing unemployment and a deepening crisis of social reproduction. In other words, it will mean entering a crisis after the Covid-19 crisis even worse than the crisis before, and with its brunt falling on the working class," warned the party.

University students who fall under the missing middle category are set to benefit from R280 million secured by Universities South Africa.  These ...
News
1 year ago

The poor's lot has got worse, giving and sympathy will help

When President Cyril Ramaphosa announced that the country would be under an unprecedented lockdown as of March 27 2020, none of us quite knew what ...
Opinion
1 year ago
Next Article