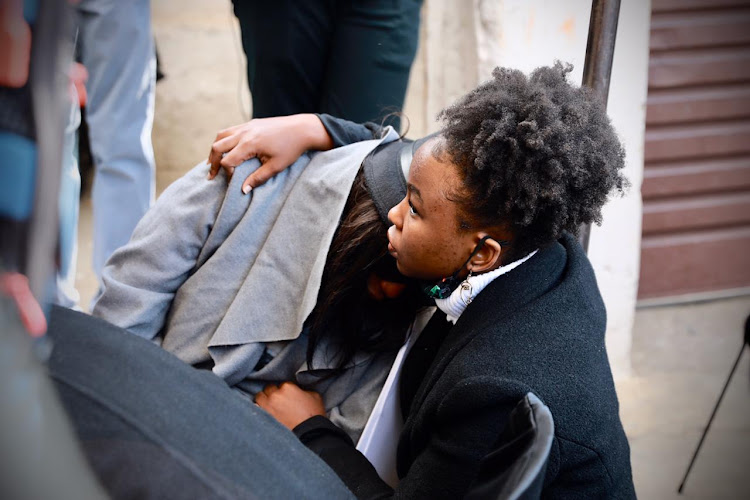 Family and friends at the funeral service of Tshegofatso Pule, who was 8 months pregnant when she was found murdered and hanging from a tree.
Image: Sebabatso Mosamo/Sunday Times

The heartbroken family of Tshegofatso Pule say they want to dedicate the day of her funeral not only to bid farewell to her but to call for an end to gender-based violence.

They were joined by friends, neighbours and government officials at the funeral of the 28-year-old at her family home in Soweto on Thursday.

Pricilla Giwu, who raised Tshego after her mother's death 11 years ago, said the family had run out of tears since the discovery of her body on Monday. She was found stabbed and hanging from a tree in Roodepoort. She was eight months pregnant. The foetus did not survive.

“I don't know what I've done wrong as a parent,” Giwu wailed.

“She did not deserve to die. Certainly not like this. Tshego was a defenceless child. She would never hurt anyone, not even a fly,” said Giwu, who broke down in tears as she knelt in front of the mourners.

She slammed men who perpetuate crimes against women and children.

“Whatever that we have done to you, give us a chance to fix it. Guys, you plant a seed into the womb, you determine the sex of the child, you are given strength to do all the things to women, why kill her, you can just walk away?” she asked.

“Men, we ask forgiveness. We surrender.” 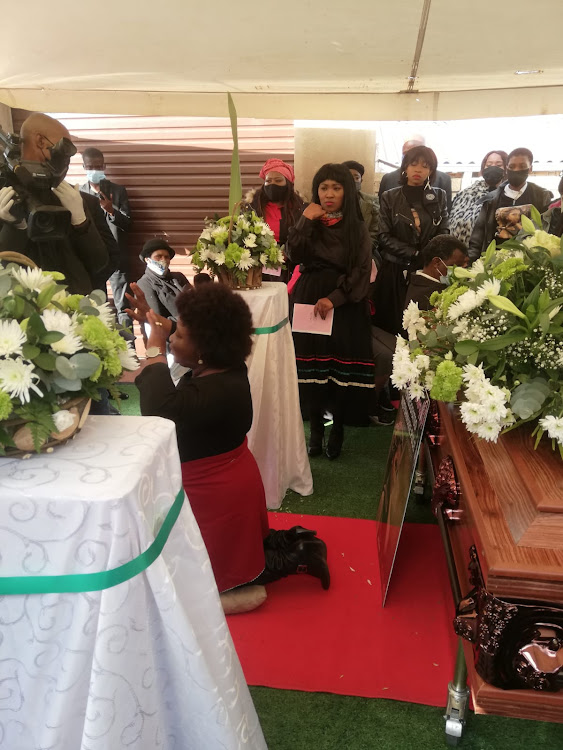 Giwu said Pule was looking forward to holding her first child in the next few weeks but was denied the opportunity to do so, by a “cruel person”.

“We are not pointing fingers, it is all well, may her soul rest in peace” she said. “Today is also for asking for forgiveness.”

The family called on police to treat grieving families with kindness.

“To all the guys in blue uniform, please treat us with courtesy, empathise with us. I am with you”

Another family representative, Grace Mbobo, said the incident had left the family reeling, because Pule had been kind and always took precautions to remain safe.

Recalling her moments with family, Mbobo said Pule would just smile and express remorse when she had done wrong. “She would just blush and say 'I am sorry auntie', you would not go further and shout at her.”

Mbobo said she had been aware of a misunderstanding between Pule and the father of her child. She said the family had approached the man regarding the child, to no avail. “We tried to consult the so-called baby's father but he played duck and dive for several weeks,” she said.

Mbobo said after the failed attempts, the family pleaded with Pule to allow them to raise the child. “No child has ever been an orphan, leave that man alone and allow us to raise this child.”

She hoped that God would reveal what had transpired. She called on young women to choose partners carefully.

“Look for a God-fearing man, he will not rough you, however let us also be God-fearing so that God can direct us.”

She said that Pule had become spiritual in her last days. “I think it was because of the child she was carrying, she was constantly asking God to protect the child, but it all fell on deaf ears.”

She slammed Pule's killer and referred to another loss in the family. "We once went through a similar incident, but what we we've learnt is that if you're a God-fearing person, as Tshego was doing, when evildoers have arrived, God takes the soul immediately.”

Emotional scenes played at the funeral service of a slain Soweto woman who was found hanged on a tree. Tshegofatso Pule, 28, who was eight months ...
News
2 years ago

A baby shower with family and friends is something Tshegofatso Pule will never experience.
News
2 years ago
Next Article