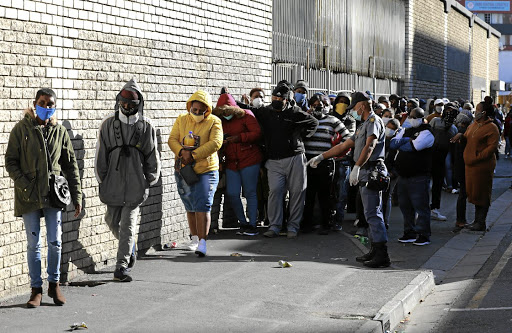 A police officer is busy keeping UIF claimants in line. UIF says it has paid Ters funds to over 425,000 employers. / Gallo Images/Nardus Engelbrecht

Delays in the payment of Unemployment Insurance Fund (UIF) relief is taking a toll on some workers who are struggling to put food on the table and meet their financial obligations.

Workers in various sectors have been hit by the delays in the payment of UIF Temporarily Employee/Employer Relief Scheme (Ters) and this includes those in the transport sector.

The government introduced the scheme to help millions of workers who have lost income due to the outbreak of the Covid-19 pandemic.

Jaco Potgieter, 38, of Krugersdorp on the West Rand, has been working as a bus driver for five years. His employer Bus 2000 applied for the relief and he is yet to receive payment.

This put so much strain on Potgieter's finances that on Monday he resigned from the company to cash in his pension and keep his family afloat.

"I last got paid in March for the 12 to 13 days that I worked [for that month]. Since then, I have not received a cent. Rent is behind. I have two children that I have to take care of. We need food in the house and the landlord wants rental money.

"My wife's salary is not enough to pay for all our expenses. I had no choice but to resign. In the meantime, I will be looking for a another job. I cannot wait for UIF payment because I don't know when it will come," said Potgieter.

Potgieter's wife's income has been unable to pay for the R6,000 rent that is due. For the past two months, the couple paid just R1,500 to the landlord, who was kind enough to understand their problems "but still wants the money". His wife works as a clerk.

The tragic passing of a man who took his own life in Sea Point has not only brought the mental health fallout of Covid-19 to the fore, but also the ...
News
11 months ago

"I am hungry as I speak to you. Sometimes I just eat dry bread with tea. Sometimes, I just go to bed without food."

Gary Wilson, general secretary of the South African Road Passenger Bargaining Council, told Sowetan that 120 applications were made by the organisation on March 29 and 30 on behalf of employers.

After the applications were made, only 98 companies got paid and the other 22 are still waiting for their payment. The 22 companies employ about 5,000 workers. Potgieter and Mathews employers are part of the 22 companies.

"They gave us feedback after the application to do corrections on the ID numbers and declarations. We passed that message to the companies and those things were corrected. We were surprised that at the end they did not pay for the 22 companies," Wilson said.

"They told us it is IT problems and we have to understand that there are millions of applications being processed. What is a challenge now is that window for the payment of May salaries in now opened. We have to do those applications but what about people who have not been paid for April. Workers are really struggling. How are they supposed to live?"

According to UIF commissioner Teboho Maruping, over 425,000 employers have successfully applied for Ters. Already, over R20.3bn has been paid to over 306 employers.

Many employees still desperate to share in UIF Ters benefit

Hundreds of employees are increasingly desperate or frustrated as they have not been paid the Unemployment Insurance Funds’ Covid-19 Temporary ...
Business
11 months ago

Maruping said if all the required documentation was correct, UIF paid within 48 hours.

He said when an employer applied, they were required to indicate if there was an amount they would pay, then UIF topped up, or indicated they were not paying any amount at all in which case UIF would then pay based on the Income Replacement Rate of between 38% and 60% (R3,500 to R6,700).

"The amount due to the employee plus what the UIF pays should not exceed the employee normal remuneration except where the employee is earning less than R3,500."

Maruping said that from the applications received, 59,000 had errors, for which an automatic message was sent back to the applicants. He said the IT system at UIF had not updated figures for him to state how many of the 59,000 applications were ultimately rejected.

Most of the errors related to the format in which the application is submitted.

Maruping explained some of the causes for the delays in payment.

"Just because an employer is paying UIF through Sars, it does not make the employer compliant with UIF. Section 56 of the UIF Act requires employers to declare their employees on a monthly basis through U-filing system, electronic declaration and UI-19. Most employers don't adhere to this section," he said.

"Since the majority use UI-19 to declare which is a manual process, the process takes long since we need to capture them individually... We are in a process of automating the U-19 declaration."

A UI-19 is a form to declare your employees to the UIF.

"We have never had a case where the company waited for more than a month without being paid if all information is in good order.

"We process applications as [and] when received. Those that declare using UI-19 we run the file every three days to confirm the declaration and pay," Maruping said.

Of the R16.5bn that the Unemployment Insurance Fund (UIF) has disbursed as part of the Covid-19 Ters benefits, almost half has gone to Gauteng, ...
News
11 months ago

One of the premier hotel chains in the country is contemplating the retrenchment of 145 employees at the Durban Hilton hotel.
News
11 months ago

Frustration as consumers' benefit claims get rejected amid pandemic