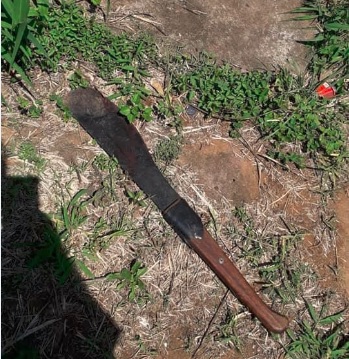 The two women were accosted on their way back home from fetching firewood.
Image: RUSA

A community in Limpopo has launched a manhunt for a man who allegedly raped a woman and attacked another.

The suspect allegedly cut the finger of a woman who had been with the rape victim. The women were on their way back home from fetching firewood.

Police spokesperson Brig Motlafela Mojapelo said the 39-year-old woman was walking with another woman when an unknown man wearing a balaclava and brandishing a sharp object, approached them.

Mojapelo said that realising that they were about to be attacked by the suspect, the two women dropped the firewood and tried to flee as the man gave chase.

"He then managed to grab the victim and slashed her with the panga and raped her. The suspect also allegedly cut one of the victim's fingers. He then left them at the scene and disappeared into the bushes," Mojapelo said.

He said the seriously injured woman was found by a passer-by who alerted the police and the woman was taken to hospital. Local councillor Edney Ntimbane said the community was still disturbed and shocked by the attack on the women in N'wamitwa, outside Tzaneen.

The family of a pensioner who was raped at gunpoint in front of her grandchildren wants the perpetrator to rot in jail.
News
1 year ago

"We have since activated the entire community to be on the lookout for the suspect who is targeting women.

"We have gathered enough information about the suspect and we informed the police to trace him," he said.

Ntimbane said the suspect was known to the community and currently on the run.

"We are not going to rest until he is arrested and rots in jail. At the moment we urge women to walk in groups when they go to fetch firewood or to any public places," Ntimbane said.

Social development MEC Nkakareng Rakgoale said she was concerned about the ongoing threat of gender-based violence by known and unknown perpetrators during the Covid-19 lockdown period.

Rakgoale said she was especially concerned that this incident took place when the country was observing child protection week, as women are naturally the nurturers and protectors of children.

She expressed her hope that the perpetrator of this violent crime would be brought to book and urged anyone with information to contact the authorities to help track him down.

Mojapelo said they were investigating cases of rape and assault with intent to commit grievous bodily harm.

A partially blind and physically disabled woman has relieved the horror of being raped by her neighbour.
News
1 year ago

A 35-year-old man was on Wednesday attacked with various objects, before he was burnt to death after he allegedly raped a young woman in Mandiwana ...
News
1 year ago

A suspected serial rapist, who allegedly committed a series of crimes over a period of seven years, was arrested in Mokopane, Limpopo, on Monday
News
2 years ago
Next Article