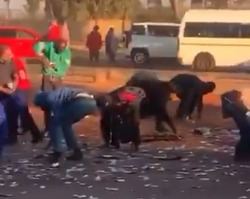 Police say residents who helped themselves to banknotes left over after a cash-in-transit heist in Kagiso on the West Rand committed a crime.
Image: Screengrab

Community members who collected banknotes at the scene of a cash-in-transit heist in Kagiso on the West Rand committed a crime, police said on Thursday.

“We are condemning the act of looting by community members. It is a crime. Anyone found in possession of the stolen cash might also face criminal charges,” said Lt-Col Brenda Muridili.

One of the suspected looters was arrested in Diepkloof, Soweto, hours after the incident on Wednesday.

Muridili said the suspect was stopped by police who had been on patrol in the township.

“The 52-year-old suspect has been charged with possession of [a] stolen vehicle,” said Muridili. This after it was found that the vehicle he was driving had been reported stolen last year.

"[He was also found in] possession of the damaged bank notes. The case has been handed over to the Directorate for Priority Crime Investigation. He was arrested by the Soweto Flying Squad members around 10.30am in Diepkloof and he is from Kagiso,” said Muridili.

The suspect had not been linked to the heist itself.

A cash-in-transit heist was carried out in the early hours of Wednesday morning in Kagiso on the West Rand, the police confirmed.
News
1 year ago

SowetanLIVE on Wednesday wrote about the Kagiso heist where videos circulating online showed locals rushing to the scene of the heist to stuff their pockets and bags with whatever notes they could find.

The heist happened late on Tuesday night, continuing into the early hours of Wednesday morning.

“It is reported that a security cash van was attacked by occupants of a sedan on Kagiso Drive. It is alleged that a group of suspects in at least three more cars were involved in the robbery,” Muridili said.

“During the attack of the cash van the suspects used explosives to gain access to the cash. The suspects fled the scene with an undisclosed amount of money as well as leaving cash scattered on the road and the Mercedes-Benz burning,” she added.

Police have urged anyone with information to come forward.