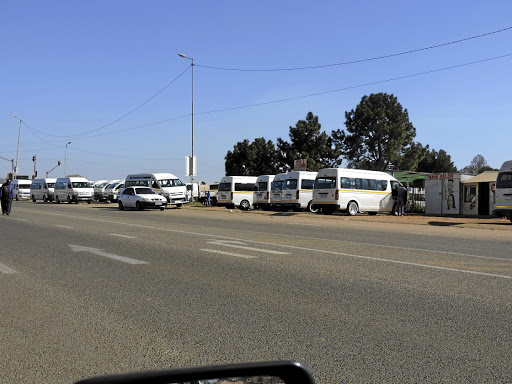 Some of the Eastern Surburb taxis quantum parked their taxis at Mahube BP taxi rank on Monday morning. / Dimakatso Modipa

Thousands of Mamelodi commuters are increasingly getting desperate for transport to work and back home amid a dispute which has seen taximen down tools for the last two days.

The strike which had affected one taxi rank on Monday, spread to another yesterday morning as taxi drivers opposed to alleged preferential treatment afforded to taxis owned by feared taxi boss Vusi "Khekhe" Mathibela continued with their protest.

Mathibela's taxis which allegedly amount to about 50, which operate under the Mamelodi Amalgamated Taxi Association (Mata) are apparently allowed to jump queues at taxi ranks they operate in.

The protest has exacerbated matter as public transport options are very limited in the township as trains are also not running due the national lockdown to curb the spread of the Covid-19 pandemic.

Two big taxi ranks in the township, one near the BP filling station in Mahube Valley, in the east and another near the Universal Church which are used by thousands of commuters daily were affected by the protest.

Hundreds of desperate commuters were seen hitch-hiking to work along main roads, including Solomon Mahlangu and Tsamaya drives yesterday morning.

Nhlanhla Disebo, who was visibly stressed was among those unable to get to work at the Menlyn Mall yesterday.

Thousands of taxi commuters in Mamelodi East were left stranded after taxi drivers protested over "preferential" treatment afforded to about 50 ...
News
2 years ago

"I'm worried because if the strike continues for a third day I might lose my job. My family will suffer and there will be no income because of this taxi strike," said Disebo

She said the strike has affected her badly because she has had to skip work and this made her employers unhappy.

"I'm pleading with taxi association to resolve their matter in their boardroom and not bring them to the streets because it affects us financially."

Another commuter, Cynthia Mashego, said she spends more than double her usual fare by using on lifts to get to work.

Thabisho Molelekwa, the spokesman of the SA National Taxi Council said taxis in Mamelodi will be back today.

He said the allegations about Mathibela's alleged unfair operations were rumours.

"These remain allegations until Santaco in Tshwane has instituted a process through which all these allegations are verified and if true the necessary corrective measures are taken," Molelekwa said.

He added: "We must state however, that we view the allegations in serious light."

An insider within the police told Sowetan that several guns were confiscated from drivers of Mathibela's alleged taxis.

Several striking drivers had gone to where taxis owned by Mathibela are parked overnight apparently intent on setting them alight.

One taxi driver who spoke to Sowetan said a large contingent of police and Tshwane Metro cops prevented them from getting into the property which is owned by the municipality.