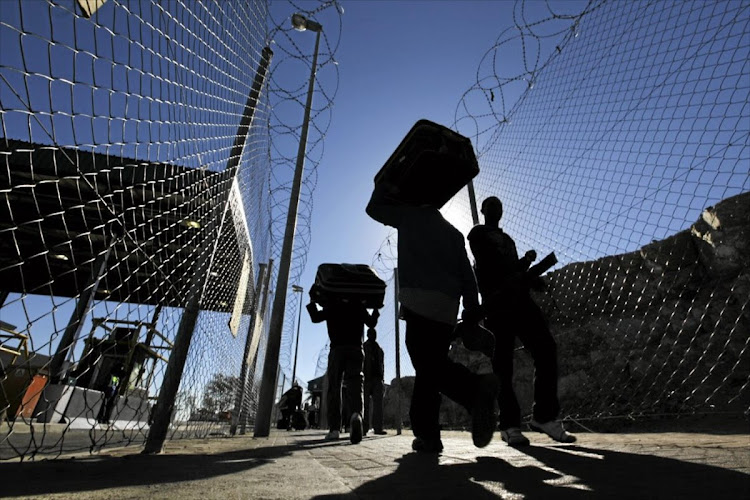 A 40km-long fence costing more than R37m will be erected at Beitbridge.
Image: Sunday Times/Esa Alexander

Although it is being vandalised daily, the director-general of public works and infrastructure Sam Vukela told MPs that the Beitbridge border fence - erected as an emergency measure to curb the spread of Covid-19 - was serving its purpose.

“Yes, we can confirm that it is serving the purpose because we did so in compliance with the needs of the client and we have not heard any contrary view that it is not serving.

“We are satisfied that it is serving the purpose,” said Vukela on Wednesday.

He was responding to MPs' questions as to whether the department believed the R37m fence was money well spent.

Vukela said this despite his boss, minister Patricia de Lille, telling the same meeting of parliament's public accounts watchdog (Scopa) that her department's senior management team was getting daily reports of theft and vandalism of the fence.

The R37m fence at the Beitbridge border separating South Africa and Zimbabwe was hardly up a day before trespassers cut through it to smuggle in ...
News
2 years ago

De Lille said even after defence minister Nosiviwe Mapisa-Nqakula deployed extra patrols along the border, including a helicopter and motorbikes, “the vandalism and theft continued on a daily basis.”

The department of defence is responsible for ensuring the safety of the country's borders.

The entire project is a subject of a series of investigations - including by the auditor-general, the public protector and the National Treasury, among others.

MPs raised questions about the decision to award the contract to the same company that had failed to deliver a proper service before, and the process followed in awarding the contract and whether there was value for the money spent on the project.

“Did we get the best value for money? That is exactly one of the issues that I have asked the auditor-general to investigate. What is the current market rate of fences, who are the suppliers and all of that - the investigation will determine whether we got value for money,” said De Lille.

That border fence is a disgrace, to say the least. It is anchored in corruption, wrongdoing, favouritism and abuse. It cannot be right.

The minister said she was prompted by thousands of questions from the public and the media to request the auditor-general to investigate the project. She did this in the public interest and to publicly account for what may have gone wrong, she said.

“I also raised the same issue of the costs in our daily meetings with senior management and one of the explanation the DDG [deputy director-general] provided was the terrain under which the contractor had to work.”

Scopa chairperson Mkhuleko Hlengwa said it was obvious that something fundamentally wrong happened in the project.

“Something is amiss. The pieces of the puzzle don't seem to be fitting. What we see there doesn't give us the comfort that you should have paid R37m. It's just chalk and cheese,” he said.

Hlengwa suspected that the department may have abused deviation processes in the project, saying it would be important for Scopa to set a benchmark for oversight using this as standard because of the value involved and the seriousness of the matter, it being a security feature.

“We still need to make a determination that it has fulfilled the particular purpose,” he said.

Other MPs asked why the department awarded the contract to the same company whose previous work had been questionable.

The EFF's Veronica Mente questioned the quality standards the department applied in approving the fence.

De Lille announced in March that her department would erect a R37m, 40km fence – 20km on each side of the Beitbridge border post - to ensure that those who crossing between SA and Zimbabwe do so through the legal channels.

But as soon as the fence went up, criminals struck, cutting it to cross over and transport contraband. They also stole parts of the fence.

Her department had followed an emergency procurement process that entailed the appointment of the required service providers through a negotiated procedure.

It awarded the contract to a company that was already doing work at Beitbridge on the premise of an existing contract, which it said was determined through a competitive bidding process in 2016. This was in line with Treasury regulations and that an ordinary procurement process would have taken longer.

Despite a 40km fence being erected along the border at a cost of R37m in April, Zimbabwean smugglers still regularly cross the border.
News
2 years ago

Public works minister Patricia de Lille has asked for an investigation into a controversial border project commissioned by her own department.
News
2 years ago
Next Article