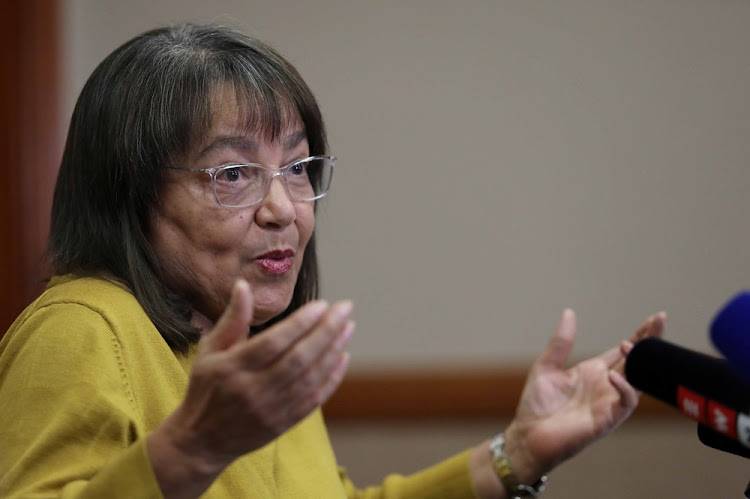 Public works and infrastructure minister Patricia de Lille has been criticised by MPs for her decision to shut down the Independent Development Trust (IDT). File photo.
Image: Esa Alexander/Sunday Times

MPs across political party lines were united this week in their anger at public works and infrastructure minister Patricia de Lille for her unanimous decision to shut down the Independent Development Trust (IDT), the state agency responsible for delivering social infrastructure.

The entity has been struggling to pay salaries and had to be bailed out by De Lille's department several times since last year.

De Lille wrote to the trust in March this year saying the failure of the board and executive management over time to address ongoing concerns regarding the agency's financial viability and governance amounted to a breach of fiduciary duties.

She revealed in that letter that since her appointment mid-2019, IDT management had requested R29.9m from her department in order to meet its obligations such as salary payments.

The government spent over R105m burying 15 high-profile South Africans between February 2018 and February this year, parliament heard on Monday.
News
1 year ago

“I am told that the IDT remains unable to meet its financial obligations and continues to require the department's financial support to cover operational costs,” she said.

She added that in light of both the state of the trust's finances and governance, she could not authorise any further fund to the agency to service its debts.

“Having been informed of both the financial insolvency of the IDT, as well as the failure of attempts to find a financially sustainable business model that would result in its turn-around, it would be fiscally irresponsible and irregular for me to do so,” De Lille wrote at the time.

In a meeting on the public works portfolio committee on Tuesday, MPs from the ANC, DA, IFP and ACDP lashed out at De Lille in her absence, saying closing down the entity was not a decision she could take without informing parliament.

The action of the minister was reckless. She cannot do what she did. We are the committee, we approve the budget of the department and she accounts to us.

De Lille will be called later this month to answer for “sidelining” parliament.

“The action of the minister was reckless. She cannot do what she did. We are the committee, we approve the budget of the department and she accounts to us. She cannot go out there and sing about the future of the IDT without taking us into confidence,” said ANC MP Timothy Mashele.

Mashele also spoke about how the IDT has “an illegal board” presiding over it and that nothing was being done to address that.

Legally the board is supposed to have eight members, but it has been operating with only three members, making the legal standing of its decisions unclear.

“She told us last year she will restructure IDT. We don't have any report to say this is what they've done in terms of implementing that strategy. We should summon her and we should not agree to what she is saying,” said Mashele.

The DA's Samantha Jane Graham, who was the first to raise concerns over De Lille's “unilateral decision” on the IDT, said even public works and infrastructure director-general Sam Vukela wasn't aware of the plan to close the entity as he told MPs in March of plans to make it viable.

The R37m fence at the Beitbridge border separating South Africa and Zimbabwe was hardly up a day before trespassers cut through it to smuggle in ...
News
2 years ago

Graham said she believes De Lille has overstepped her mandate in shutting down the IDT.

She suggested that the committee pushes for a social infrastructure arm within the department, if the IDT could not be made viable.

Other MPs called for a strong stance by the committee against De Lille for the way she has handled the matter.

De Lille's spokesperson Zara Nicholson told TimesLIVE that the interim chairperson of the IDT board wrote to De Lille in February requesting a meeting with the minister to discuss various matters, including the initiation of a process of dissolving the IDT.

Nicholson said the first step in the process is a cabinet memorandum, together with a board resolution and a detailed process plan of the exit strategy, including engagement with labour, the financial issues, assets and liabilities, and the numerous litigation cases against IDT.

“This is currently being prepared by a multidisciplinary task team that the minister established, which is working during the lockdown period, in order for the cabinet memorandum to serve before the cabinet,” she said.

“The minister recognises the urgency of this matter as the IDT is in financial crisis, being unable to make ends meet and requiring the department of public works and infrastructure to supplement its operational costs.”

The parliament committee resolved to invite both the IDT and De Lille to present the options she had considered before arriving at her decision to close the agency.

Public works minister Patricia de Lille has asked for an investigation into a controversial border project commissioned by her own department.
News
2 years ago

Public works minister Patricia de Lille said on Monday that the army has been sent to the Beitbridge border fence after reports that it had been ...
News
2 years ago
Next Article