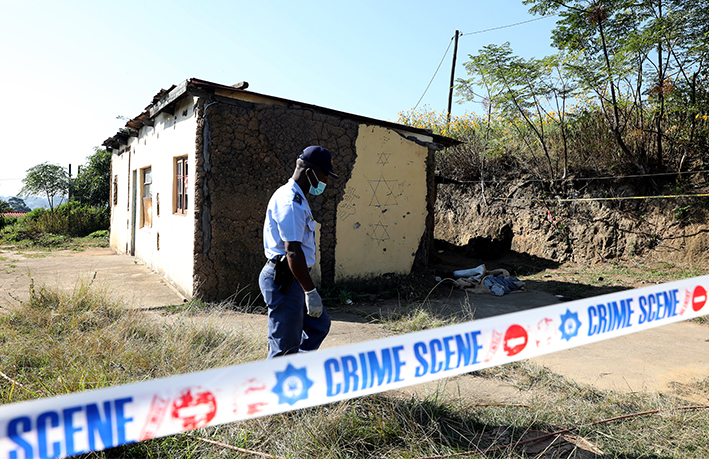 KwaZulu-Natal Provincial Commissioner Lt-Gen Khombinkosi Jula at the site of the house where seven men were executed.
Image: Sandile Ndlovu

A 23-year-old man, Sibusiso Langa, has been charged with the murders of seven KwaZulu-Natal men who were shot in the head while in a house in eMsahweni in KwaMakutha, south of Durban, in May.

According to police, Langa was arrested on Sunday and appeared in the Umbumbulu magistrate's court on Wednesday.

“Investigations are ongoing and we cannot rule out the possibility of further arrests,” said spokesperson Brig Jay Naidoo on Wednesday.

News of the men's death rocked the semirural community after several gunshots were heard coming from a dilapidated house in the area on the evening of May 20.

Provincial police commissioner Lt-gen Khombinkosi Jula visited the crime scene after the shooting. He said police suspected that the house was being used as a drug den, as they had found drugs on the premises.

Langa was remanded in custody and is expected back in court on June 11.

The ANC Youth League in eThekwini is mourning the killing of its leader, Kingdom Gcabashe, 29,
News
1 year ago
Next Article