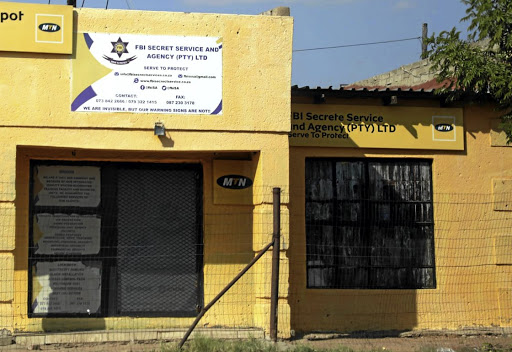 The supervisor at FBI security company has been arrested for murders.
Image: Supplied

The conduct of a security company whose three guards were recently found dead, is under investigation by the industry's regulator.

FBI Secret Service and Agency, which is based in Kopanong, Hammanskraal, north of Pretoria, had not reported the deaths of its three security officers to the Private Security Industry Regulatory Authority (PSiRA).

PSiRA spokesperson Siziwe Zuma said they were "not formally informed" about the deaths which occurred last month, with the last body being discovered over a week ago.

Ofentse Monaledi and Bongani Khunong's bodies were found in a veld just across the road from where they were stationed in Bon Accord, north of Pretoria, with gun wounds in their necks.

The body of their colleague who disappeared on the same day was found buried in a shallow grave over a week ago. Their supervisor, Steven Hlongwane, has been arrested for their murders and will appear in court on Wednesday for a formal bail application.

Zuma told Sowetan that PSiRA's "preliminary investigations of this matter indicate that the deceased were not registered with PSiRA".

"However, though, the business is registered. The executive head of law enforcement, advocate Linda Mbana, has ordered a full investigation into the conduct of the security service provider [FBI Secret Service and Agency]," Zuma said.

Ofentse Monaledi, a security guard, left home on the morning of April 2 to confront his employer over non-payment.
News
1 year ago

Thabo Hlongwane, the owner of FBI Secret Service and Agency, couldn't be reached for comment as his phone rang unanswered yesterday and he had not responded to Sowetan's text messages
requesting his comment by the time of going to print.

Khunong and Monaledi's family expressed concerns that their sons were allowed to carry firearms at work while they had not received any training on the use of guns.

Monaledi's mother Goitsimang said she had been very concerned about the conditions her son was working under, including the fact that he never got paid despite starting his job on February 24.

"My son has never even trained as a security guard, neither did he get any training to use guns. Ofentse went to work [on April 2] just to get paid his first and last salary and leave that job," Goitsimang said.

She said her son was desperate to buy nappies for his newborn baby who he died without even seeing.

Khunong's mother Gladys said her son had taken the job as a temporary measure so that he could raise enough money to acquire his driver's licence. He was killed barely a week into the job on which he was recruited by a man who's now accused of killing him.

"I was not happy with him being made to carry guns while at work because even though he received training as a security guard, it didn't include using firearms."

Hlongwane has been charged with three murders and being found in possession of stolen property.