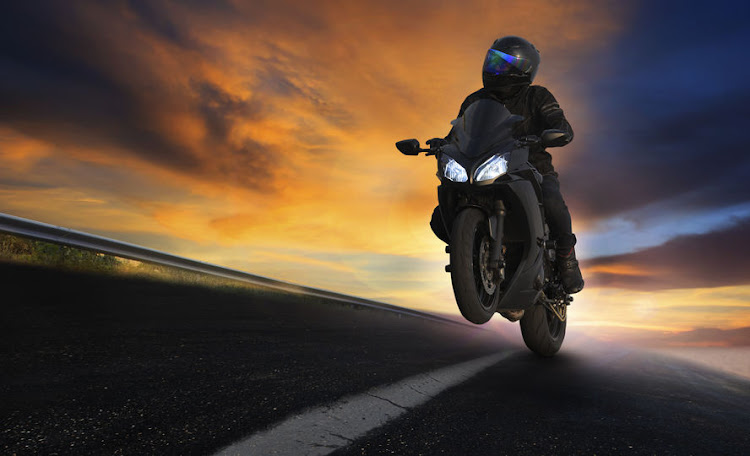 A 40-year-old mechanic was caught riding his motorcycle at almost 250km/h on the N1 in Cape Town.
Image: 123rf/khunaspix

Cape Town traffic cops have had their hands full with speedsters during the lockdown.

Among thousands of motorists breathing life into the cliché “pedal to the metal” was a 40-year-old mechanic who was caught doing close to 250km/h on the N1.

JP Smith, the mayoral committee member for safety and security, said the mechanic was “taking a client’s motorcycle for a test drive” when he was “arrested after he passed a Ghost Squad officer at high speed”.

Eric Ntabazalila, the spokesperson for the prosecution in the Western Cape, said the mechanic, who cannot be named until he appears in court, faces a reckless driving charge. “He was warned by police to appear in court on July 21,” said Ntabazalila.

Towering SuperSport United striker Thamsanqa Gabuza and his friends were arrested for alleged reckless and negligent driving and breaking lockdown ...
News
1 year ago

Smith said the five fastest speeds recorded between March 27 and May 24 ranged between 273km/h and 185km/h. The alleged offenders were arrested in Plattekloof, Gordons Bay, Paarden Eiland and Constantia.

“It appears that many people took advantage of the very low traffic volumes on the roads, but failed to realise that they were putting their lives and the lives of others at risk,” said Smith.

“Speed enforcement has remained one of the functions of the traffic service that has been able to continue as normal under the lockdown, as there is no contact required during mobile speed-trapping.

“In addition, the city also has a number of fixed cameras located around the metropole that record speeding transgressions and motorists jumping red lights.”

Smith said Cape Town was fitting traffic officers’ cars with dashcams to improve the conviction rate. “A big part of this is the prosecution of course,” he said.

“In the past we struggled with the prosecution because the officers couldn’t prove his/her version of the facts. All of our traffic vehicles will sit with dashcams next year.

“That will be a big game-changer because the whole interaction is recorded: the speed the vehicle is going at, the behaviour of the other motorist, the comments and the voice of the officer, any loudhailing that happens and any interaction in front and around the vehicle.

“The court spends eight hours trying to convict one guy for reckless and negligent driving and all he says is ‘it wasn’t me’ and ‘I didn’t do it’. Now officers will just take the footage to the court and play it and that will be the end of it.”