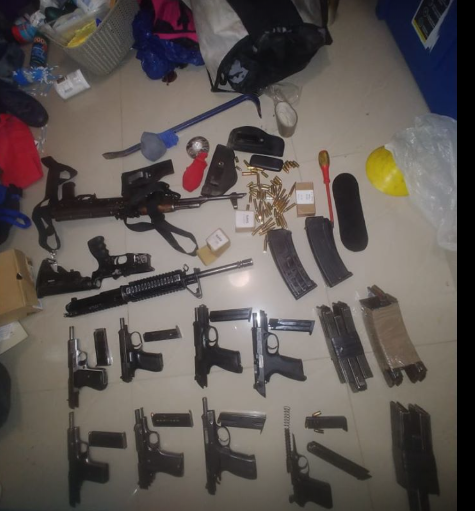 A man described by police as a “most wanted suspect” being sought for armed robbery, business robbery, cash-in-transit heists and car hijackings was shot dead in a shoot-out with police in Diepsloot in the north of Johannesburg on Friday night.

Police spokesperson Capt Kay Makhubele said that members of the Tshwane TRT, Ekurhuleni TRT and Gauteng traffic police, acting on intelligence driven information, proceeded to an address where the suspect was hiding in Riverside View.

“Upon arrival, it is alleged they knocked on the door and the suspect's girlfriend opened the door. Police tactically positioned themselves around the house. When the suspect realised that it was the police, he allegedly fired one shot, the police returned fire and fatally wounded the suspect.

An ATM fraud syndicate is suspected of being involved in a shopping mall shootout with police on Thursday in Paarl, in the Western Cape.
News
2 years ago

“Upon entering and searching the house, they found a bag with nine pistols, two rifles and magazines with live ammunition. A white Mercedes-Benz AMG suspected to be hijacked was also found in the yard,” Makhubele said.

Meanwhile, in another multidisciplinary operation in Johannesburg CBD police seized counterfeit goods of shoes, tekkies and clothes worth R38m on Friday, he said.

Gauteng provincial police commissioner Lt-Gen Elias Mawela commended the work done by the Gauteng police and urged the community to continue to work with the police.

He also issued a strong warning to “those who think that the normal day-to-day police operations are on the back burner due to lockdown to think again. Gauteng is not a place to hide.”

A shootout between police and suspected cash-in-transit robbers travelling in a taxi left three people dead and eight arrested outside Cape Town.
News
2 years ago

Police minister Bheki Cele visited the home of a policeman who was gunned down while on duty in Cape Town‚ saying that the community cannot go on ...
News
3 years ago
Next Article